Largest Countries in the World (by Area)

Many people are surprised to learn what countries are in fact the largest by area. While some are no-brainers, others may make you raise an eyebrow. It’s time to test your knowledge as we look at the largest countries in the world by area. See if some of your guesses made the list!

As we look at the largest countries in the world by area, there are several factors to consider. These include:

Understanding these concepts will help you understand how countries are ranked according to their total area. Many people don’t realize what goes into measuring a country’s size and often mistake a country’s size.

NOTE: Country rankings aren't definitive; instead they provide an approximate comparison. Country data vary enormously depending on the sources, and there is an absence of reliable data on some countries.

How Do You Measure a Country’s Size?

A country's total area includes its landmass and a region of the sea extending out to (or beyond) its continental shelf. Different countries measure their oceanic area differently, which can lead to some flexibility in the rankings. We've gone with the official areas listed in the CIA World Factbook, but some might argue that we should only measure a country's land area. In that case, the rankings would change slightly. China would be the second largest country, followed by the United States of America, then Canada.

In a surprising change from the norm, as national borders have been fairly fixed for the past decades, Russia has arguably gained area (if one includes Crimea in the count). Crimea would add another 27,000 square kilometers to Russia's already boggling size.

How Do You Display a Country’s Real Size?

Map projections are often discussed when talking about how a country’s real size is displayed. The commonly used Mercator projection can certainly give a false impression of how big different countries are. To fit in a 3D globe onto a flat plane, areas near the poles are stretched out and made bigger. When you take that into consideration, Russia, Canada, and the United States of America are all very big in reality. These three have all held the top three spots, in the order, since the U.S. incorporated Alaska in the 1900s.

What Are the 10 Largest Countries by Area?

Now that we have a better understanding of how a country’s size is measured and how a country’s real size is displayed, it’s time to reveal the world’s largest countries by area. 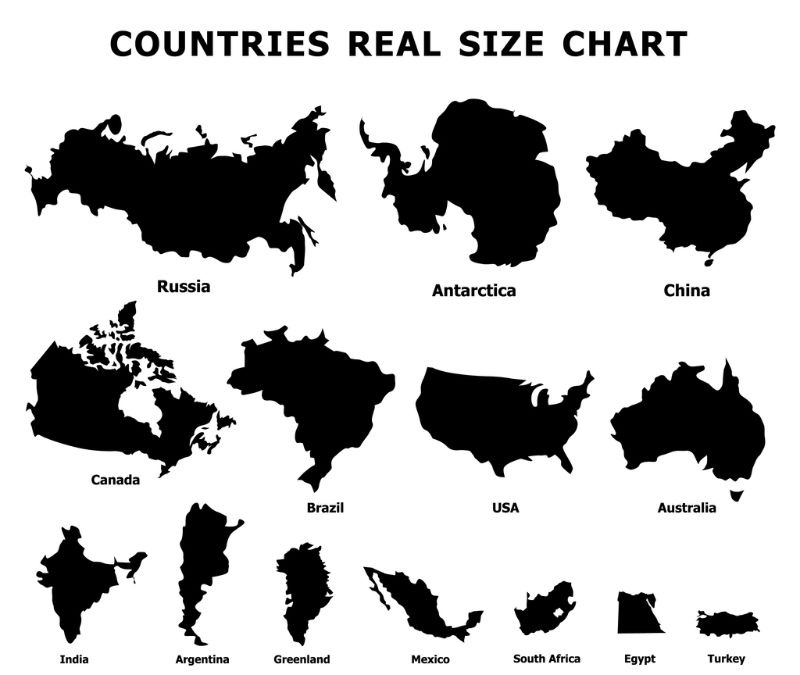 What Are the Largest Countries by Continent?

This is a bit of a tricky category, since the absolute largest country, Russia, straddles two continents (or not, depending on which model of the continents you follow). "Asian" Russia would still be the largest country in Asia. Greenland is also questionable, since it's technically governed by Iceland.

You’ll notice that Antarctica is not on the list. This is because it has no countries. However, if it was a country itself, it would be the second largest in the world behind Russia.

Using the Seven Continents model popular in the U.S., let’s take a look at the largest countries when you divide them entirely by continent.

When you look at the countries in Africa, you’ll notice that the size of all of the countries varies. Algeria is the largest while The Republic of Congo is the smallest. Many other countries fall in the middle.

Asia is home to the fourth largest country in the world, China. Interestingly enough, there are several very small cities in China, such as Hong Kong, which is only 1,110 square kilometers. When you look at other Asian countries, you’ll notice that there are several very small countries, such as Afghanistan and Yemen. This is how several countries in Asia rank when it comes to their size:

Compared to countries on other continents, countries in Europe are very small. Even the largest on this list, Turkey, is not that big when you look at the sizes of other countries around the world. You’ll notice that the United Kingdom is not listed as it is under 100,000 square kilometers.

North America is home to the second largest country in the world, Canada. With more than nine million square kilometers of space, Canada lags far behind the first-place holder, Russia which measures 17 million square kilometers. The USA doesn’t fall far behind Canada when you look at its measurement as it is the second-largest country in North America.

Although not many countries are listed in Oceania, Australia is fairly large with more than 7 million square kilometers of space. New Zealand on the other hand is extremely small, with just 270 thousand square kilometers.

South America is a true mix of different-sized countries ranging from the largest, Brazil to Uruguay with under 200 thousand square kilometers, which is one of the smallest countries in South America.

As you consider all of the largest countries by area, you’ll notice that they range greatly in size. It’s important to note that typically a country’s total area includes its landmass and a region of the sea extending out to (or beyond) its continental shelf. But different countries measure their oceanic area differently, which can lead to some flexibility in the rankings.

It’s also interesting to not only look at the largest countries in the world as a whole but also how they rank within their own continent. Many people often wonder why Antarctica is not on the list. this is because it has no countries to call its own. But, if it was a country itself, it would be the second largest in the world behind Russia.

So, the next time you’re playing a trivia game, impress your friends and win the game when it comes to questions about the largest countries in the world! If you want to test your knowledge about different continents in the world and the different countries of the United Nations, we have several quizzes for you to try. You can test your knowledge of European landmarks or perhaps see what you know about other countries of the world.