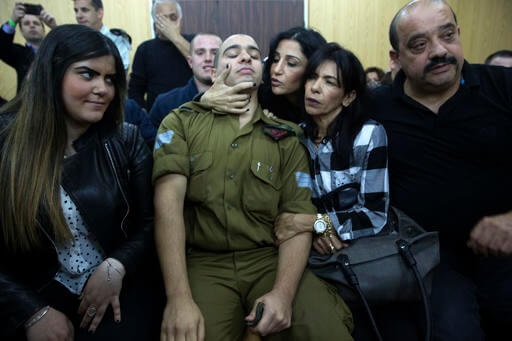 On Jan. 4, 2017, Israeli soldier Sgt. Elor Azaria is convicted of manslaughter inside the military court in Tel Aviv, Israel. The Israeli military, which has battled foes on all of the country's borders, is now facing a challenge from within: nationalist politicians who are increasingly criticizing the army and bickering with Israel's security establishment. Angry reactions from within Prime Minister Benjamin Netanyahu's coalition to the manslaughter conviction of Sgt. Azaria, who fatally shot an already wounded Palestinian, underscore the growing rift. Netanyahu and other senior Cabinet ministers quickly call for the soldier to be pardoned, in effect undercutting the authority of the military court that convicted the young man.
Photo source: Heidi Levine, Pool via AP, File