How Do We Know About Ancient History? 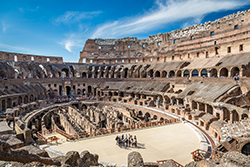 Gaius Julius Caesar was assassinated on March 15th, 44 BCE by Marcus Junius Brutus, Gaius Cassius Longinus, and many other conspirators. Historians agree on the names of the key people involved, where it happened, when, and how. But how do historians come to this knowledge, and how do they know what?s true? After over 2,000 years how can we be sure we?re not playing one very, very long game of Telephone?

There are three levels of sources that historians use. Primary sources are documents and artifacts very close to an event, either because they?re from the same time or because they originate with someone who participated in the event?in the context of Roman history this could include public records and journals of important figures. Secondary sources are documents produced later by people with no direct connection, like the writings of near-contemporary historians Tacitus and Suetonius, or of modern historians. Lastly are tertiary sources, compiled collections of other sources (your history textbooks would count as tertiary sources).

The job of the historian is to critically analyze their sources, identify problems or sources of bias, then take what they?ve learned and construct an argument about what happened. If this seems complicated, it is. Research is constantly changing as sources are reevaluated and new sources are discovered. With political events like, say, the assassination of Caesar, the biggest pitfall is probably bias. Much like today, people of the past were biased in the way they presented information. Caesar?s enemies would describe his death differently than his allies. Even Julius Caesar?s own journals, which are some of the most valuable sources on his life, aren?t perfect; were the people of Gaul really so barbaric, did Caesar just view them that way, or did he fabricate events to justify the Roman conquest? These are the kinds of questions historians have to solve. Luckily, they don?t have to do so alone.

In the last century, traditional history has been helped immensely by the development of archaeology. Historians can more accurately date their sources to determine their closeness to an event, and access to human remains opens all new doors for analysis. For example, analyzing the strontium content of old teeth can reveal where people came from, and allows archaeologists to track migration. This hard evidence can prove essential to studying events with few written sources (as would be the case when studying common folk or cultures without a tradition of keeping records).

The other big boon to historians is the work of experts in other fields like linguistics, literature, chemistry, and so on. A linguist could study the words used in a text to determine its origin, or a literature expert could look at the style and symbols. These interdisciplinary efforts can help historians develop a fuller understanding in their research by gaining some insights into historical cultures, and to help weed out fictionalized or fraudulent sources.