History In View: The Fog of War 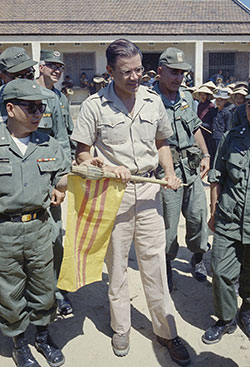 One of the biggest barriers to learning more about history is the inaccessibility of most scholarly history books. The best history for research purposes is tight in its focus, has a bibliography reaching for miles, and takes the pages it needs to develop a nuanced and precise narrative. A 400-page book about crop production in Northern Ireland from 1750 to 1790—loaded with so much jargon you need a master's to parse it—is just not accessible to most non-history buffs. Even a colorful film with dry subject matter and pedantic explanations will remain unwatched.

On the flipside, many popular histories consumed by non-specialists tend to flatten out the nuance of the period and produce overly simplified (if not outright incorrect) accounts of history. Some of these films or books, at worst, can reinforce negative stereotypes and misconceptions in the public eye, and the in-depth scholarly rebuttals just don’t get read because they lack the same flair.

In the History In View semi-regular feature, Infoplease writers are going to take a look at different history media and resources (books, movies, shows, podcasts, etc.) that are respected by historians and that are actually enjoyable. These series will feature a variety of subjects in to keep readers interested. This author grew up in the dark days when it seemed like two out of every three historical shows or documentaries were about World War II, the days when the History Channel was nicknamed "the Hitler Channel".

The way this is going to work is that each History In View is going to feature one to three different bits of media with a common theme. We’ll discuss what they’re about, what’s good about them, what are some criticisms from the experts and from the consumers, and how you can access them. Now, on to the first featured historical program.

The Fog of War: Eleven Lessons from the Life of Robert S. McNamara (2003)

"The Fog of War" is a documentary film directed by Errol Morris. The film is based off of the reflections of Robert S. McNamara. McNamara was the first president of Ford Motor Company not from the Ford family, president of the World Bank through the 70s, and Secretary of Defense for Kennedy and Johnson at the onset of the Vietnam War. The film features long pieces of the 22-hour interview between Morris and McNamara, from which the director derived eleven “lessons.” The movie also features a soundtrack by renowned composer Philip Glass.

What It Does Well:

This movie offers a uniquely intimate view of the U.S. government and its presidential administrations during the war, where most attention is (perhaps rightfully) given to the soldiers and civilians on the ground. It also creates an image of one of the Vietnam War’s architects and the motivation behind his policies. McNamara’s recollection of the Cuban Missile Crisis and the Gulf of Tonkin Incident are especially interesting. This kind of insight is particularly valuable with a war best remembered as futile and aimless. McNamara himself is a talented speaker, which makes the film more engaging. On a technical level, the film’s presentation is wonderful—the cuts are well-timed, the music is perfectly suited, and the interview portions don’t feel stuffy, as in the usual “PhDs in front of bookcases” clips.

What Critics Have to Say:

The broad critical reaction is that "The Fog of War" is a great history film with one very important caveat. The documentary is not an objective “here’s how it happened” kind of movie, but rather a subjective interview with the person in question. That means that a lot of the information presented is going to be biased or limited, and the movie shouldn’t be taken as something more than what it is. Opposition to McNamara’s views may or may not be worth considering in tandem to viewing "The Fog of War." McNamara himself publicly stated that the “eleven lessons” were not devised by him, although he didn’t object to the film. The DVD version of the film included 10 additional lessons provided by McNamara.

Where You Can Get It:

"The Fog of War" is available online on YouTube, Amazon Video, Vudu, iTunes, and Google Play. Hard copies are available through Netflix DVD Rental, and from retailers. Prices vary.

When partaking in history media, featured here or not, there are a few steps you can take to get a quick idea of how strong the research is. The first is to always check the bibliography or the experts cited--does it seem to have a lot of reliable academic and primary sources? This applies to film as well as print. The second thing you can do is to consider bias--what is the argument the book is making, and how might that affect the evidence they use? This can be especially important with film documentaries, where experts’ interviews are often cut to alter the meaning. Lastly, remember that whatever you’re consuming is just a single perspective, and not necessarily the absolute truth. You can still partake and enjoy in some history media even if it’s not perfect.

With that in mind, if you have any pieces of history media that you love and that you’d like to share, email us your recommendations at editors[at]infoplease.com and we might feature them in the future!