The Wedding of Prince William and Kate Middleton

Details on one of the most expensive celebrity weddings in history 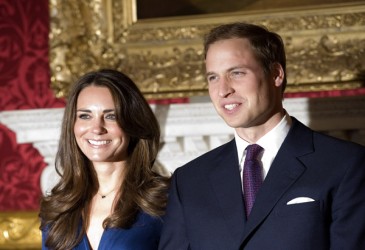 Invited guests first received save-the-date notices via fax. On February 17, full handwritten invitations, decorated in gold, followed to 1,900 friends and family members. Six hundred of those guests also have been invited by the Queen to a reception that she is hosting immediately after the ceremony in the Abbey. Later, around 300 of those 600 guests are invited to a dinner hosted by William's father, Prince Charles, in the evening at Buckingham Palace. A hundred lucky members of the public will be selected at random to attend the ceremony.

Many in attendance will be government officials and royals, including the monarchies of Belgium, Denmark, Holland, Norway, Romania, Spain, and Sweden. One expected attendee invited by Kate Middleton is John Haley, the owner of the Old Boot Inn in Stanford Dingley. Middleton has been a regular at the pub, which is located in the neighborhood where she was raised. She brought William to the pub when they started dating.

It is rumored that Princess Diana's family has been invited by Prince William. One famous royal, however, will not be in attendance: Duchess of York Sarah Ferguson is not invited. Her children, Princesses Beatrice and Eugenie, have been invited, as well as her ex-husband, Prince Andrew. Four ex-girlfriends of Prince William's are invited: Rose Farguhar, Olivia Hunt, Arabella Musgrave, and Jecca Craig. Kate Middleton has invited Rupert Finch, who was her first boyfriend at the University of St. Andrews.

Celebrities invited include Sir Elton John, David and Victoria Beckham, Mr. Bean actor Rowan Atkinson, filmmaker Guy Richie, and singer Joss Stone. Also on the list are Australian Olympic swimmer Ian Thorpe, the King of Swaziland, the King of Tonga, the Queen of Spain, Prince Constantine of Greece and Sheikh Ahmad Hmoud Al-Sabah of Kuwait. Ex-Prime Ministers Tony Blair and Gordon Brown did not on the list, which raised some eyebrows, while former Conservative leaders Margaret Thatcher and John Major are invited. Prince Salman bin Hamad Al Khalifa of Bahrain declined to attend, saying he did not want the unrest in his country to tarnish the celebration.

Although details are scant, much ado is already being made of Kate Middleton's dress. The public won't catch a glimpse of it until the wedding day, but expect copycats and knock-offs to hit the boutiques shortly after the wedding day. Designers rumored to be tasked with designing the dress include Bruce Oldfield, one of Princess Diana's favorites, and Sarah Burton, creative director of Alexander McQueen's fashion house.

Prince Harry, William's younger brother, planned the bachelor party, referred to as stag night or stag weekend in Britain. The celebration took place over the last weekend in March at a Norfolk estate. The low-key festivities, which were kept secret, did not exceed $4,000 (£2,500).

Kate Middleton's sister, Pippa, is planning the bride's hen night, the British term for a bachelorette party. A spokesperson for Prince William and Kate Middleton has confirmed that Prince Harry will serve as William's best man while Pippa will be the maid of honor.

Since the engagement, Kate Middleton has been sporting the ring selected by Princess Diana for her engagement: an 18-carat oval sapphire surrounded by diamonds. Priced at $60,000 when chosen by Diana, the British press quickly renamed the stone "commoner's sapphire" because of its relative affordability. The stone is appropriate for Middleton, who is also a commoner.

The only announcement to come close to controversy has been Prince William's refusal to wear a wedding band. When asked about it, Palace officials explained that he has never worn jewelry. Considering double ring ceremonies are a relatively recent phenomenon—at the end of the Great Depression only 15 percent of marriages were double ring ceremonies—one might ask what's the big deal? It's not like he won't be the most recognizable married man on the planet. Still this announcement caused a stir, prompting people around the globe to ask, "Why not?"

The Royal Wedding Ceremony will be held at Westminster Abbey. The church, which holds 2,000 people, is expected to be filled to capacity. The ceremony will begin at 11 a.m. with three clergymen dividing up the duties: the Dean of Westminster will conduct the service, the Archbishop of Canterbury will preside over the vows, and the Bishop of London will give the address.

Kate Middleton will arrive to the church by car, which is a break in tradition. It is traditional for a Royal bride to travel in a horse-drawn Glass Coach, named for its large windows, to the ceremony. Middleton and her father will arrive at the ceremony in a repaired 1997 Rolls-Royce Phantom VI. The car was damaged in December by students tossing bottles and sticks. The mob was protesting student fee hikes.

After the ceremony, Middleton and Prince William will return to Buckingham Palace in a carriage procession that will pass some of the city's most historical landmarks, including Parliament Square, Horse Guards Parade, Whitehall, and the Mall. When they arrive at Buckingham Palace, the bride and groom are expected to share a kiss on the balcony as the Prince's parents did 30 years ago.

The Reception & After Party

Queen Elizabeth II, William's grandmother, will host a wedding breakfast at Buckingham Palace immediately following the ceremony. At a wedding breakfast, a British term for reception, a morning meal is typically not served. The night of the wedding, Prince Charles will host a dinner and dance party at Buckingham Palace for family members and close friends of the newlyweds. Unlike most weddings, there will not be a bouquet toss. Royal brides leave their bouquets at the grave of the Unknown Warrior at Westminster Abbey.

The wedding of Prince William and Kate Middleton, his girlfriend of nearly eight years, is expected to be the most expensive celebrity wedding of all time. It will likely cost the British taxpayers over $20 million dollars.

No information has been released about the couple's honeymoon plans, although Middleton was spotted two weeks prior to the wedding shopping for clothing worn in a warm climate. Stay tuned for more details!