Franklin D. Roosevelt
"A date which will live in infamy" 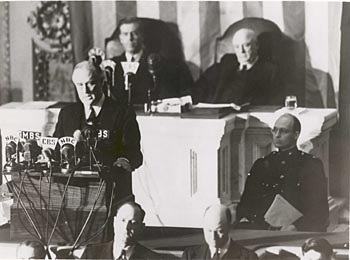 The day after the surprise attack on Pearl Harbor by the Japanese on December 7, 1941, President Franklin D. Roosevelt delivered his famous speech in front of a joint session of Congress and, via radio, the nation. His words were answered by a Congressional declaration of war and the United States' entry into WWII . ??Yesterday, Dec. 7, 1941?a date which will live in infamy?the United States of America was suddenly and deliberately attacked by the naval and air forces of the Empire of Japan.??
Photo source: United States National Archives