Why is Kaliningrad part of Russia?

Russia's exclave on the Baltic Sea 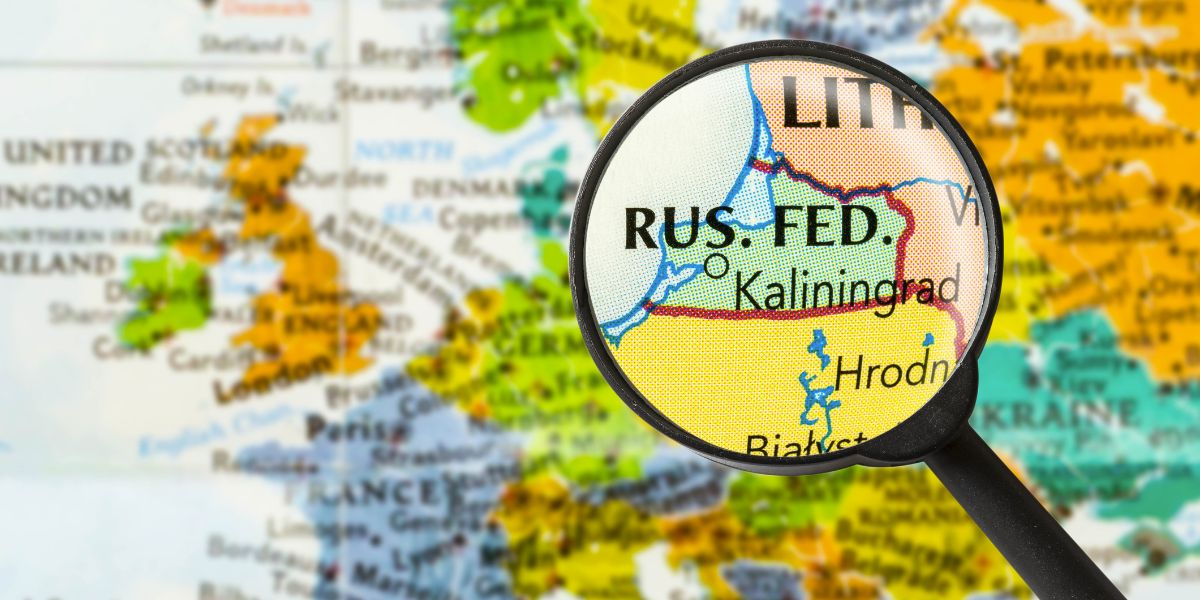 The city that is now known as Kaliningrad has a contentious past. For most of its history it was inhabited by Prussian Germans, and was known by its German name Konigsberg. But it was also familiar to the Poles, who called it Krolewiec. It is now under the control of the Russian Republic, part of the Kaliningrad region that is cut off from the rest of Russia by Poland and Lithuania.

Kaliningrad is part of Russia today because of the ruthlessness of Joseph Stalin, who saw an opportunity to punish Germany for its crimes during the Second World War and gain a valuable port at the same time. The Soviet Premier turned a German city into a Russian one, and it remains one to this day.

German Settlements in the East

For most of European history Germans had occupied lands well to the east of the current borders of Germany. Germany itself didn't exist as a unified nation. Instead, there were numerous kingdoms and principalities of varying sizes. There were also pockets of German settlement scattered among the Slavic nations to the east. These settlements reached as far as the Volga River in Russia.

Much of the land along the Baltic coast, reaching as far as modern-day Lithuania, was controlled by the Kingdom of Prussia, one of the more powerful German states. Prussia's territory included the mouth of the Pregolya river, where it emptied into the Baltic Sea. This was the location of Konigsberg, an important port city.

The City of Konigsberg was founded in 1255 by the Teutonic Knights. The town and surrounding area were mainly populated by Germans, Poles, and Lithuanians. The city grew to become a member of the Hanseatic League, and played an important part in regional trade.

In 1525 it became the capital of the Duchy of Prussia, which at the time was a Polish fiefdom.

In the early 1600s Prussia became increasingly independent from Poland. In 1701 Prussia was united with German Brandenburg, and became the fully independent Kingdom of Prussia. Russia annexed Konigsberg in 1758 during the Seven Years War, but Prussia regained the city in 1762.

Afterward, Prussia began to consolidate its position as a leading German state, leading to its creation of the German Empire in 1871. Konigsberg grew and prospered under the Prussian and German crowns, reaching a population of almost 250,000.

The city became famous as the home of Immanuel Kant, one of the most influential philosophers of the enlightenment. Kant taught at the University of Konigsberg, also known as the Albertina, one of the world's leading colleges at the time. The Albertina would also be the home of David Hilbert, a leading mathematician of the late 19th and early 20th centuries.

After suffering defeat in the First World War, the German Monarchy was deposed, and the Weimar Republic took its place. Under the Treaty of Versailles, Poland received a port along the Baltic Coast, and Danzig, another important Baltic port, came under the control of the League of Nations.

This "Polish Corridor" turned East Prussia into an exclave -- a German territory that was cut off from the remainder of Russia by Poland.

The Weimar Republic proved to be unstable. It was unable to pay hefty war reparations, and suffered from severe inflation. Economic stress and weak democratic institutions created the opportunities that Adolph Hitler and the National Socialists exploited to seize power. While it was not the party's home base, the Nazis did build up solid support in East Prussia.

After consolidating their power in Germany, the National Socialists followed a reckless course as they sought to regain lost territories and expand. In 1939 and 1940 Hitler initiated wars in the east and the west. Germany found itself fighting wars against potent enemies on two fronts.

With advanced weapons and tactics, Germany had success on both fronts at the beginning of the war, capturing Paris and overrunning most of eastern Europe, including Poland, Ukraine, and a large portion of Russia.

German occupation was often brutal, especially against Slavic nations that they considered inferior. Hitler was determined to wipe out Europe's Jewish population, and the Nazi government killed over six million Jews.

With British and American support, the USSR reversed Germany's gains, retaking its territory and replacing German occupation with Marxist satellite governments as Soviet armies moved into Germany itself. Soviet forced besieged Konigsberg on the sixth of April 1945 and took the city on the ninth.

In July and August 1945, shortly after Germany fell to Soviet, British, and American forces, the leaders of the allied nations met at Potsdam, a suburb of Berlin. The administration of Germany and eastern Europe were big items on their agenda.

After a long, bitter war, Soviet Premier Joseph Stalin was determined to exact revenge on Germany in the east. British Prime Minister Winston Churchill and US President Harry Truman were less vindictive themselves but wanted to put an end to German militarism. They were willing to give the Soviets a relatively free hand in the areas they controlled.

The allies agreed that Germany would lose further territory in the east, including East Prussia and Konigsberg, with most of the lost land going to Poland. Germany's eastern border would be along the Oder and Neisse rivers, just 50 miles (80 km) east of Berlin. Konigsberg was another 200 miles further to the east.

The remainder of Germany would be divided and occupied by the victorious allies. Most important for the people of Konigsberg and East Prussia, the Soviet Union and its satellite states were free to expel their German populations.

Regardless of Stalin's plans, Germans living in eastern Europe were bound to be the targets of reprisals from the local population on account of the damage and bloodshed from the war and the harshness of German occupation.

Many eastern European Germans fled to the west as Soviet armies advanced. Local governments expelled the rest in the five years after the war's end. At least 12 million people relocated to occupied Germany, including both German citizens and ethnic Germans who had been citizens of other nations.

Konigsberg had reached a population of over 360,000 at the beginning of the war, but at the end only 72,000 remained. Moscow wasted no time making East Prussia their own. The province was split up, with the southern half going to Poland. The Soviets took the northern half, including Konigsberg.

In 1946 they renamed the city Kaliningrad, after Mikhail Kalinin, an influential Bolshevik who had taken part in the Russian Revolution and passed away earlier that year. Kaliningrad and the surrounding territory were made an oblast of the Russian Soviet Federative Socialist Republic.

Kaliningrad was cut off from Russia, although it did have borders with the Soviet Republic of Lithuania. It also shared a border with Poland, a nominally independent country but in reality a Soviet satellite state that could be relied upon to allow transit across its territory.

Soviet leaders moved quickly to solidify their control. The remaining German population was forced out between 1946 and 1949. To take their place, 400,000 Soviet citizens, mostly Russians, were moved into the Kaliningrad Oblast.

Throughout the Cold War the City of Kaliningrad proved valuable as the home port of the Soviet Baltic Fleet. It was one of the few "warm weather" ports held by the Soviet Union; its waters did not freeze up during the winter, so ships could sail in and out year-round. The harbor is sheltered by the nearby Curonian Spit, on which the town of Baltiysk provides more docking facilities.

When the Soviet Union broke up in 1991, the Kaliningrad Oblast lost its overland connections to Russia, as Lithuania gained its independence and Poland broke free from the Soviet orbit. As Konigsberg was once a German exclave, Kaliningrad became a Russian one.

Some of the old Konigsberg remains, though. The Konigsberg Cathedral has been restored to its prewar appearance, and hosts both Orthodox and Lutheran services along with concerts. Immanuel Kant's tomb is nearby. The Juditten Church dates back to the 13th century. The old Prussian fortifications at Dohan have been converted into the Amber Museum.

Kaliningrad remains the main base of Russia's Baltic fleet. The Russian Federation uses the Kaliningrad oblast as a base for missiles that it could use to attack North Atlantic Treaty Organization (NATO) forces in central and eastern Europe.

Poland and Lithuania both border the Kaliningrad oblast, and the area was historically German, but none of the three nations have made any attempt to claim the territory. Germany went so far as to renounce its historical claim as part of the treaty that allowed reunification.

Belarus has expressed some interest in claiming the Kaliningrad region, but it has no borders and little in the way of historical ties. The nearby Baltic nation of Latvia has shown no interest.

While Kaliningrad is a challenge for NATO, it will likely remain Russian for many years. Stalin was ruthless and thorough in making the city and surrounding countryside his own. Nearly 90 percent of the population of Kaliningrad is Russian, and most of the remaining population is Ukrainian or Belarussian.

Until the demographic makeup of Kaliningrad changes, it is difficult to see what military or diplomatic measures could be taken to pry it away from the Russian Federation.