What's the Symbolism of the Irish Flag? 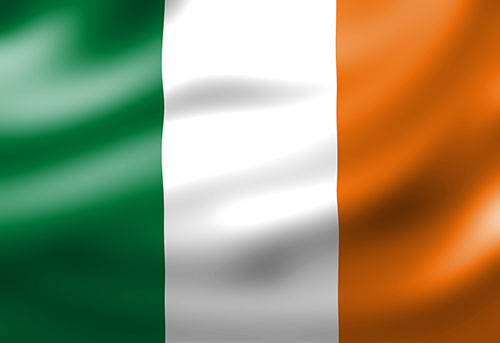 Rarely has a flag possessed such lasting relevance as that of the "Tricolour," the national flag of the Republic of Ireland. Its three equal stripes illustrate the Irish political landscape as accurately today as in 1848, the year the flag was first unfurled.

The color orange is associated with Northern Irish Protestants because in 1690, William of Orange (William III)defeated the deposed King James II, a Roman Catholic, in the fateful Battle of the Boyne near Dublin. King William wasthe leader of England, Scotland, and Ireland and his victory secured Protestant dominance over the island. The primary colonizers of northern Ireland were the English (who were Protestant Anglicans) and the Scots (who were Protestant Presbyterians). To this day, Protestants in Northern Ireland are sometimes called Orangemen and theycelebrate the anniversary of the Battle of the Boyne each July 12th.

Green as the Emerald Isle

It's widely agreed that the green in the Irish flag has something to do with shamrocks and verdant landscapes.However, it's more criticalto the Irish Catholic nationalists represented by this flag color that green symbolizes revolution. An earlier, unofficial Irish flag ?the gold harp on a green background? served from 1798 until the early twentieth century as a symbol of nationalism. The harp is stillIreland?s national symbol today. As the revolutionary James Connolly wrote, just weeks before he participated in theEaster Rebellion (1916) that led to his execution by firing squad:

Lasting Truce Between Orange and Green

Although it was not adopted as the national flag of Ireland until independence from Britain on December 6, 1921, the Tricolour was first unfurled in public on March 7, 1848, by the militant nationalist Thomas Francis Meagher1, (the stripes, however, were arranged differently at that time). Explaining the significance of the Tricolour, Meagher expressed a hope for his country:

The white in the center signifies a lasting truce between the "Orange" and the "Green," and I trust that beneath its folds the hands of the Irish Protestant and the Irish Catholic may be clasped in generous and heroic brotherhood.

1. Irish revolutionary was just one of Meagher's careers: he was also a prisoner in a Tasmanian penal colony, a New York City lawyer, and a Civil War general for the Union Army.