A Snapshot of U.S. and Global Higher Education Today 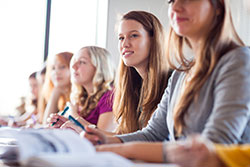 The months when many students will be making their final college choices are upon us, so it's a good time to take a look at the status of college enrollments around the world. The Organisation for Economic Co-operation and Development (OECD) provides data that—while it may not represent all of the world’s countries—provides an interesting snapshot of how the United States stacks up against other countries when it comes to higher education.

Rate of Enrollment in Non-Mandatory Schooling:

Enrollment of Women in Non-Mandatory Schooling:

There’s been a global trend of women becoming the majority of college attendees in many countries—a far cry from earlier decades. It is rare now for men to ever be a college majority.
Country with the Highest Percentage of Women: Ireland (97.2%)
Country with the Lowest Percentage of Women: Colombia (43.2%)
Highest Disparity Between Women and Men: Costa Rica (Women +18.1%)
Highest Disparity Between Men and Women: Switzerland (Men +1.9%)
U.S. Percentage: 83.5%
U.S. Disparity: Women +3.8%