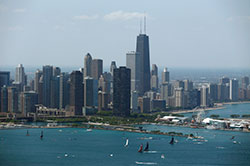 Chicago, Illinois, is known as the Windy City. The name may come from the breezes off Lake Michigan or the braggadocious population, no one knows for sure. But its rapid growth from a humble trading post to a major commercial center alone is enough to crow about.

Chicago’s first permanent resident was a free black trader named Jean Baptiste Point du Sable, who settled in the area in the late 1770s. In 1795, the U.S. government built the ill-fated Fort Dearborn, which Native Americans burned to the ground in 1812. It was rebuilt only to be demolished in 1857.

Chicago’s growth into a bustling metropolis coincided with U.S. westward expansion. Situated on Lake Michigan and the Chicago River, it became a hub of commerce in the American West. The Illinois Waterway, completed in 1848, followed quickly by the railroad solidified Chicago’s place in the American economy by connecting Lake Michigan with the Mississippi River. Even today, half of all U.S. freight passes through Chicago’s rail yards. O’Hare and Midway International Airports make it the country’s busiest aviation center.

Growth prompted rapid construction of building and sidewalks -- all made primarily of wood -- and in 1871, that construction would become the city’s downfall. On October 8, the Great Chicago Fire was started and spread rapidly, hopping from one wooden structure to another. Two days later, 17,000 structures were destroyed, 300 people were dead, and 100,000 more were homeless.

But there was a silver lining. In the aftermath of the fire, Chicago began to rebuild, which prompted population and economic growth. Just 22 years later, the city would host the World’s Fair, unveiling it’s legendary White City. The city persevered through the Depression, but saw its population shrink in the 1950s and 1960s. Race and poverty became major issues, and riots followed the assassination of Martin Luther King, Jr. in 1968.

Despite its struggles, Chicago continues to attract large populations of immigrants from all over the world, and it remains a center of trade.

Per U.S. Census estimates, Chicago has the following demographics: