So Far so Good

The third Women's World Cup has been everything that organizers could have hoped for. Record crowds have packed stadiums around the country to see the U.S. national soccer team beat the best teams in the world. 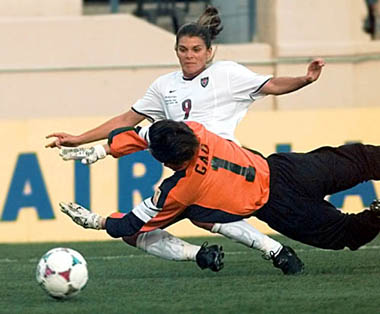 U.S. forward Mia Hamm and teammates will try to get the ball past China's Gao Hong ? possibly the best goaltender in the world ? in Saturday's World Cup final.

The Cup's final game ? to be played between the U.S. and China on Saturday at the Rose Bowl in Pasadena, California ? is sold-out. Somehow, President Clinton was able to get a ticket on short notice. The expected crowd of 90,000 should break the record for attendance at a women's sporting event, surpassing the current record of 78,972 for the World Cup-opening doubleheader involving the U.S. team at Giants Stadium on June 19.

Fans have been coming out to see all the teams. So far, an average of over 35,000 spectators have attended each match ? including more than 22,000 for games not involving the U.S.

Things are going according to plan on the field: the two best teams will meet in the final. How will the U.S. fare against an equally powerful Chinese squad? For American fans, the hope is the home field advantage will put them over the edge. China, however, has outscored opponents 19-2 in the tournament and has a 2-1 record against the U.S.

Both teams are solid front-to-back and coaches expect a controlled, low-scoring game.

"As long as there's attacking soccer and teams trying to score goals and plays by the goalkeepers and near-misses, it doesn't have to be a lot of goals," United States coach Tony DiCicco said.

'They're Going to Play Attractive Soccer'

"It's going to be two teams that are fit, that are ready, that are going to go out to win this game and they're not going to hold anything back," DiCicco said. "They're going to play attractive soccer."

Goals for the U.S. will be at a premium while facing the excellent Chinese goaltender, Gao Hong, who has three shutouts in the tournament.

The Ones to Watch

While watching the match, keep your eyes on #16 Tiffeny Milbrett, #12 Cindy Parlow and #9 Mia Hamm for the U.S. Any one of them can score whenever they get the ball near the net. On the Chinese side, watch #9 Sun Wen, who is tied for the tournament lead with seven goals, two of which she scored in China's 5-0 stomping of Norway in the semifinals.

The game should be less physical than some matches in the tournament but the U.S. should be able to capitalize on their height advantage during corner kicks and free kicks.

The game could very well be the greatest women's soccer match ever played. The U.S. will be playing as the underdog for the first time in the tournament and will need a special effort to beat a Chinese team on a mission for their first World Cup title. Regardless of the outcome, it will be fun to watch. Check it out on Saturday afternoon at four o'clock on ABC.