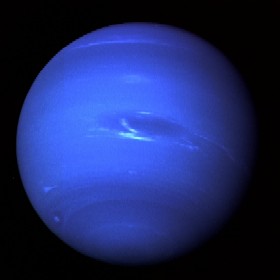 Neptune, named for an ancient Roman sea god, is a stormy blue planet about 30 times farther from the Sun than Earth. Neptune was discovered when astronomers realized that something was exerting a gravitational pull on Uranus, and that it was possible that an unknown planet might be responsible. Through mathematical calculations, astronomers determined there was indeed an undiscovered planet out in space?a year before it was actually seen for the first time through a telescope (in 1846).