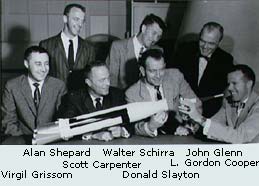 Mercury. Project Mercury, initiated in 1958 and completed in 1963, was the United States' first human-in-space program. It was designed to further knowledge about humanity's capabilities in space.

The Women in Space Program

In 1960, NASA also tested the first female trainees for astronaut duty in the Mercury program. Thirteen out of America's 25 top female civilian pilots (women weren't allowed to be military pilots then) passed the same rigorous testing that male candidates underwent in the Mercury 7 space program. Although all the pilots proved fit to become Mercury astronauts, NASA suddenly canceled its testing of qualified women in July 1961, claiming that they required jet test-pilot training at Edwards Air Force Base. Unfortunately, instruction at Edwards was closed to women. This new requirement ended America's chance to put the first women in space.

It is ironic that unlike her skilled American counterparts, Valentina Tereshkova, the first woman to fly in space, was a textile factory worker when she entered the Soviet space program. She had no experience as a pilot and her only qualification was that of an amateur parachute jumper before being trained as a cosmonaut in 1962.

Gemini. Gemini was an extension of Project Mercury and was designed to determine the effects of prolonged space flight on humans for two weeks or longer—the time it would take to reach the Moon and return. “Walks in space” provided invaluable information for astronauts' later walks on the Moon. The Gemini spacecraft, twice as large as the Mercury capsule, accommodated two astronauts. Its crew named the project Gemini for the third constellation of the Zodiac and its twin stars, Castor and Pollux. The capsule differed from the Mercury spacecrafts in that it had hatches above the capsules so that the astronauts could leave the spacecraft and perform spacewalks or extra-vehicular activities (EVAs).

When the Gemini program ended, U.S. astronauts had perfected rendezvous and docking maneuvers with other orbiting vehicles. 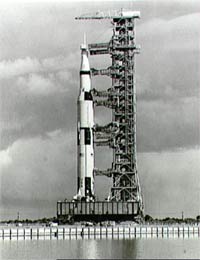 Apollo. Apollo was the designation for the United States' effort to land a person on the Moon and return him safely to Earth. Tragedy struck Jan. 27, 1967, on the launch pad during a preflight test of what would have become Apollo 1, the first staffed mission. Astronauts Lt. Col. Virgil “Gus” Grissom, Lt. Col. Edward H. White, and Lt. Cdr. Roger Chafee lost their lives when a fire swept through the command module.

The moon landing was successfully accomplished with Apollo 11 on July 20, 1969, culminating eight years of rehearsal and centuries of dreaming. Astronauts Neil A. Armstrong and Col. Edwin E. Aldrin, Jr., scooped up and brought back the first lunar rocks ever seen on Earth—about 47 pounds. Six Apollo flights followed, ending with Apollo 17 in December 1972. The last three Apollos carried mechanized vehicles called lunar rovers for wide-ranging surface exploration of the Moon by astronauts. The rendezvous and docking of an Apollo spacecraft with a Russian Soyuz craft in Earth orbit on July 18, 1975, closed out the Apollo program.

Apollo was a three-part spacecraft: the command module (CM), the crew's quarters and flight control section; the service modules (SM) for the propulsion and spacecraft support systems (when together, the two modules were called CSM); and the lunar module (LM) that took two of the crew to the lunar surface, supported them on the Moon, and returned them to the CSM in orbit. The crews that made the lunar flights where both command modules and lunar modules were involved selected call names for the vehicles. The call names for the spacecraft in the six lunar landing missions with the command module and lunar module designations respectively were:

The third lunar attempt, Apollo 13, April 11–17, 1970, 5 days, 22.9 hours, was aborted after the service module oxygen tank ruptured. The Apollo 13 crew members were James A. Lovell, Jr., John L. Swigert, Jr., and Fred W. Haise, Jr. The mission was classified as a “successful failure” because the crew was rescued. 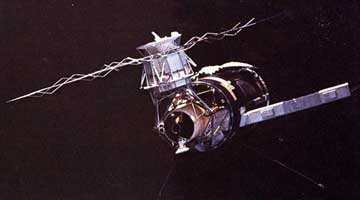 Skylab. America's first Earth-orbiting space station was launched May 14, 1973. Project Skylab was designed to demonstrate that men could work and live in space for prolonged periods without ill effects. Originally the spent third stage of a Saturn 5 Moon rocket, Skylab measured 118 ft from stem to stern, and carried the most varied assortment of experimental equipment ever assembled in a single spacecraft. Three three-man crews visited the space stations, spending more than 740 hours observing the Sun and bringing home more than 175,000 solar pictures. These were the first recordings of solar activity above Earth's obscuring atmosphere. Skylab also evaluated systems designed to gather information on Earth's resources and environmental conditions. Skylab's biomedical findings indicated that humans adapt well to space for at least a period of three months, provided they have a proper diet and adequately programmed exercise, sleep, work, and recreation periods. Skylab orbited Earth at a distance of about 300 mi. Five years after the last Skylab mission, the 77-ton space station's orbit began to deteriorate faster than expected, owing to unexpectedly high sunspot activity. On July 11, 1979, the parts of Skylab that did not burn up in the atmosphere came crashing down on parts of Australia and the Indian Ocean. No one was hurt.

A tragedy occurred on Jan. 28, 1986, when the shuttle Challenger exploded, killing the crew of seven 73 seconds after takeoff.

The crew members who were killed were: Francis R. Scobee, shuttle commander; Cdr. Michael J. Smith, pilot; mission specialists Judith A. Resnik, Lt. Col. Ellison S. Onizuka, and Ronald E. McNair; and payload specialists Gregory B. Jarvis and Christa McAuliffe (who was to have been the first civilian schoolteacher in space).

The cause of the explosion was a rupture in a seal on one of the booster rockets, which let a jet of flame escape, igniting the fuel. The weakness in the seal was caused by the cold air temperature when the shuttle was launched.

The first U.S. space mission since the Challenger disaster was launched 32 months later, on Sept. 29, 1988, with the flight of Discovery. It had a crew of five and deployed a communications satellite.

The fifth orbiter, Endeavour, was built as a replacement for Challenger. It was named after the 16th-century British explorer James Cook's first ship. Endeavour was launched on its maiden voyage on May 7, 1992, with a crew of seven astronauts. They made four spacewalks and retrieved a disabled Intelsat-6 communications satellite. During the mission, Dr. Kathryn Thornton became the second American woman to walk in space (Kathy Sullivan was the first in 1984).

Lt. Col. Eileen M. Collins became the first woman to pilot a shuttle, Discovery, during the spacecraft's historic rendezvous with the Russian space station Mir on Feb. 6, 1995. The shuttle Atlantis made the first link-up with the Mir on June 29, 1995.

Lt. Col. Collins became the first woman to command a space shuttle when Columbia was launched in July 1999 on a mission to deploy the Chandra X-ray Observatory (formerly called AXAF).

Senator John Glenn, 76, the first American to orbit the Earth, flew as a payload specialist on the Oct. 1998 Discovery mission. He studied the effects of aging and microgravity on the human body.

The shuttle program's second tragedy occurred on Feb. 1, 2003, when the shuttle Columbia broke up upon reentry into the Earth's atmosphere.

The shuttle was returning after a 16-day scientific mission and was only minutes away from landing. The Columbia Accident Investigation Board subsequently ascertained that a chunk of fuel-tank foam insulation had slammed into the wing edge during liftoff, creating a hole that allowed hot gases to enter the shuttle on reentry into the atmosphere.

After two delays, the space shuttle Discovery, commanded by Eileen Collins, launched on July 26, 2005, marking the craft’s first flight since the Columbia disaster. The shuttle boasted new safety features, including a redesigned external tank, new sensors, and a boom attached to the shuttle’s robotic arm that allowed astronauts to check for external damage. Despite the safety measures, in an incident similar to that which caused the Columbia disaster, some foam insulation broke off the external tank after takeoff. NASA grounded the shuttle fleet until July 4, 2006, when Discovery flew again, even though the foam insulation problem had not been solved.

On February 24, 2011, Discovery launched its final mission and docked with the International Space Station. The crew consisted of six American astronauts, all of whom had been on prior spaceflights, including Commander Steven Lindsey. The crew joined the long-duration six person crew of Expedition 26, who were already aboard the space station. The mission transported several items to the space station, including the Permanent Multipurpose Module Leonardo, which was left permanently docked to one of the station's ports.

In March 2011, NASA began the process of shuttering its Space Shuttle program after 30 years of service. Discovery was the first of NASA's three remaining operational Space Shuttles to be retired and was moved to the Udvar-Hazy Center, part of the Smithsonian complex, in Washington, D. C. Next was Endeavour, which found a home at the California Science Center in Los Angeles in June of 2011. Finally, you can visit the last shuttle to be retired, Atlantis, at the Kennedy Space Center in Florida, as of July 2011.