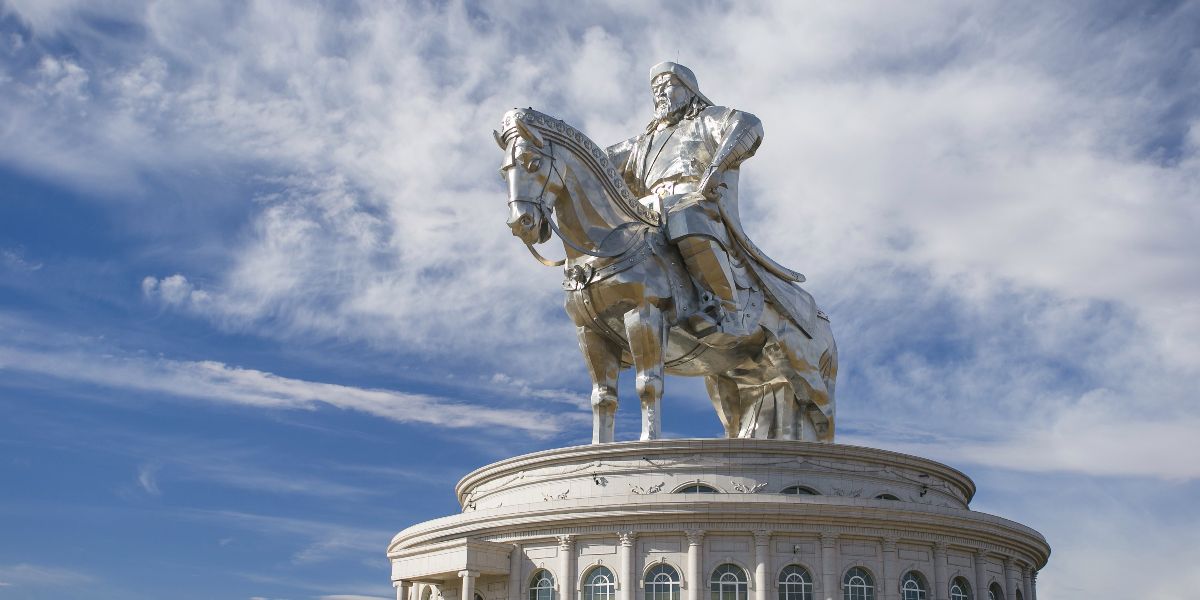 The Mongol Empire was one of the most powerful, and misunderstood, empires in history. While many people view them as barbarians that roamed the steppes of Central Asia raping and pillaging all that they could, the reality is actually very different. While the Mongols were, without a doubt, brutal to their enemies, they were also extremely tolerant towards other religions, valued the arts, gave women rights at a time when this was extremely rare, and effectively created the secure free trade zone across Eurasia that we know today as the Silk Road.

There were other Mongol dynasties throughout history, as steppe peoples invaded Northern China. The Jin Dynasty, for example, was one Chinese government established by their northern neighbors. But, when most people talk about the Mongols, they mean the empire founded by the Great Khan.

Genghis Khan (also known as Chinggis Khan) was born as Temjin around 1162. When he was 19, his wife, Brte, was kidnapped by another Mongol tribe and Temjin was able to successfully rescue her with the help of some of his allies. Although he was still very young, his strength as a military leader was already apparent. He was able to forge alliances with other Mongol leaders. His power grew as he began to successfully unite the tribes of Mongolia. He believed strongly in promoting people based on merit and he would also absorb other tribes into his own after taking power from their leaders. These two factors had a huge impact on the loyalty that his populace showed him and this eventually led to the complete unification of the Mongol tribes. In 1206, Temjin was renamed Genghis Khan, or universal ruler, and became the leader of all of the Mongols.

The Rise and Fall of an Empire

Genghis' empire continued to grow over the next 20 years. His army excelled at collecting information regarding enemy territory and forces which enabled them to identify the weaknesses of their enemies and attack accordingly. As their empire grew throughout the early 13th century, the Mongols began to recruit military specialists, engineers, and other highly skilled people from conquered territories and used these people's skills to their advantage. They frequently spared the lives of artisans and took them back to Mongolia or relocated them throughout the empire.

By the time of his death in 1227, Genghis' empire spread from the east coast of China, largely due to the defeat of the Tangut Dynasty of Xi Xia, to the Caspian Sea. The Mongol Empire continued to grow under his son Ogedei Khan and his grandsons Kublai Khan and Mngke Khan. In the 1230s, the Mongols conquered the Turks of Central Asia and then began to spread into Russia. In 1241, the Mongols were able to expand into Eastern Europe by defeating armies in Poland and Hungary. By the 1250s, they had reached the Middle East and had sacked Baghdad, which was the Islamic Abbasid Caliphate at the time. By 1279, they had conquered all of China under the reign of Kublai Khan and the capital of the Mongol Empire was relocated from Mongolia to Beijing.

One of the reasons why the Mongol conquests were so successful was their remarkable skill at ?mobile fighting?. By using skilled horse archers, they were able to strike and retreat very quickly and although they wore light armor, their maneuverability quickly made up for it. They also were somewhat self-sufficient and didn't have to worry about supply lines sustaining them which can make or break an army.

However, that began to change in 1260 and the Battle of Ain Jalut (near present-day Israel) marked a turning point for the empire when the Mongols were defeated by the Mamluks. Although they had suffered losses occasionally during the reigns of Genghis and Ogedei, they always returned with a bigger, and stronger army. The Battle of Ain Jalut was the first time that a Mongol army had been permanently defeated and it saved Egypt from Mongol invasion. The Mongols had finally been contained.

The vast empire soon began to splinter. While this is hardly surprising considering that this is what has happened to most empires throughout history, the Mongols were incredibly strong soldiers, and competent leaders and their decline was very fast.

The Mongols had no real succession plan set in place and Genghis Khan's grandchildren soon began to dispute who exactly carried the Royal Line forward. This chasm grew even further when the question arose as to whether the empire should remain nomadic or if it should become sedentary. Infighting and civil war broke out amongst tribes, weakening the empire further. The Mongolian Empire was eventually divided into four smaller empires which were the Golden Horde located in the northeastern part of the territory near Russia, the Yuan Dynasty in China, the Ilkhanate in the southeast, and Persia (present-day Iran), and the Chagatai Khanate in Central Asia.

After continuous in-fighting, the Mongolian Empire effectively disintegrated into competing armies. As a result, they lost influence over the territories they ruled. In 1368, the Ming Dynasty overthrew the Yuan Dynasty which represented the end of the empire.

The Legacy Lives On

By the late 14th century, the Mongolian Empire was gone. Although it lasted just over 150 years, the Mongols changed world history as we know it. By unifying Europe and Asia, the Mongols were able to establish peace throughout the region. Rather than convert people to their own religion, they allowed religious freedom and frequently followed the religion of the lands they conquered and became Muslims, Christians, or Buddhists. They supported and cultivated arts and became patrons of artists. They also created an international trading network by giving more protection, aid, and support to merchants and traders than the Persians or Chinese had. Trade flourished as did the spread of ideas, and technology. Sadly, it also helped spread the plague which greatly impacted the global population in virtually every way including economics, politics, and religion.

The Mongol Empire?s legacy lives on not just in the ideas and technology that developed during that era, but also in the people that populate the region today. In a recent study, a group of geneticists found that 8% of the men living within the former Mongol territory carry Y chromosomes that are identical and it is believed that the unique circumstances surrounding the Mongol invasion caused this. The Mongols were known to be a bit prolific (Kublai Khan alone had 22 sons) so it does seem like this scenario is pretty likely.

The Mongols changed the world in countless ways. While they were notorious for their brutality, they were also applauded for their approach to leadership, governance, and humanitarian values. This makes the Mongol Empire one of the most truly fascinating empires in history.