In Jan. 2016, Michigan Governor Rick Snyder declared a state of emergency for Genesee County and apologized for the water crisis in Flint. In an interview with the National Journal that same month, Gov. Snyder agreed that Flint was his Katrina, his man-made disaster. Flint's contaminated water crisis, which began in April 2014, caught the nation's attention after weeks of reporting on the story by MSNBC's Rachel Maddow, among others. With the eyes of the nation now on Flint, here's a look at that crisis and other man-made disasters in the United States. 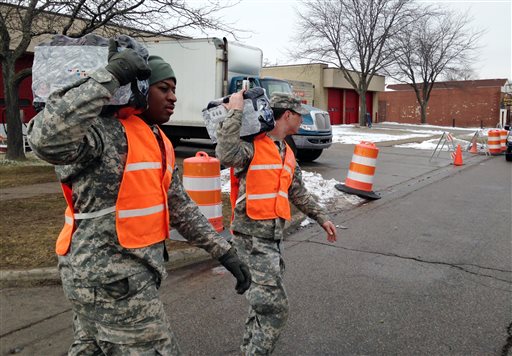 In April 2014, the 100,000 residents of Flint, Michigan, began using water from the local Flint River because a state-appointed emergency manager could get that water cheaper than the supply previously purchased from the Detroit Water and Sewerage Department. However, the water from the Flint River smelled and tasted bad. It looked dirty. After the switch in water, Flint residents lost hair, developed rashes and other health issues, including an outbreak of Legionnaires' disease. For months, state officials maintained that the water was safe to drink. However, independent studies found high levels of lead in the water and elevated lead levels in the city's children.
In Oct. 2016, Flint switched back to purchasing its water from Detroit, but the aging pipes had been badly damaged from the corrosive Flint River water. President Obama followed Gov. Snyder's state of emergency declaration by declaring the crisis a federal emergency, authorizing the Department of Homeland Security and other agencies to help in Jan. 2016. The National Guard (pictured above) was brought in to deliver supplies such as bottled water and filters. The state sent $28 million to Flint for medical expenses, supplies, and upgrades to the city's infrastructure. However, according the Flint Mayor Karen Weaver and other city officials, $28 million was not enough to fix the damaged pipes.
Photo source: AP Photo/Matt Sedensky