How Do Jewish People Celebrate Passover in Israel Today? 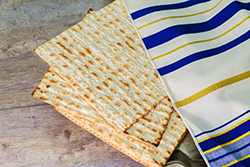 Passover is the Jewish spring festival that commemorates the freeing of the Israelites from slavery in Egypt. In Hebrew, the word for this holiday is Pesach, which means ?to pass over.? In the book of Exodus, the Torah tells that God helped the Israelites escape from slavery in Egypt by inflicting 10 plagues upon the ancient Egyptians. Those plagues included disease, locusts, and darkness. It was only after the 10th and final plague ? the death of all first-born sons in Egypt ? that the Pharaoh agreed to release the Israelites.

It is from the 10th plague where the English name of the holiday is derived. To spare the sons of the Israelites, they were instructed by Moses to mark their doors with lamb?s blood. Upon seeing the marking, the spirit of the Lord knew to pass over the house and therefore spare the inhabitants of those homes.

Ultimately, Passover is a celebration of freedom. In Israel, Passover is the seven-day holiday of the Feast of Unleavened Bread, with the first and last days observed as legal holidays and holy days. During those days, observant Jews do not attend work or school. Holiday candles are lit at night, and kiddush and sumptuous holiday meals are enjoyed. The middle four days are called Chol Hamoed, semi-festive days when most forms of work are permitted.

Passover is referred to as the feast of unleavened bread in the Torah. During Passover, observant Jews eat an unleavened type of bread called matzo. According to tradition, this is because the Hebrews fled Egypt in such a hurry that they had no time to let their bread rise. In recognition of this, no leavened bread can be consumed for the duration of the festival.

One of the most important Passover rituals for observant Jews is removing all leavened food products, known as chametz, from their homes and abstaining from consuming them for the duration of the celebration. The preparation process actually begins weeks before the festival starts, as families thoroughly clean their homes to remove all traces of chametz. This includes all foods and drinks which have any amount of wheat, barley, rye, oats or spelt. Examples of these foods would be breads, cakes and pasta.

The Passover celebrations commence with the Passover Seder, a special ceremony celebrated with family and friends. During the Seder the story of their ancestors? flight from Egypt is recounted, special foods are eaten, and traditional holiday songs are sung. This elaborate ritual takes place in fifteen separate steps and is usually celebrated on the first night of Passover after nightfall. A special text called the Haggadah is used as a sort of checklist or guide for the meal. At the center of the ceremonial meal sits the Seder Plate , which contains six symbolic foods, each of which has a special significance to the story of Passover. Four cups of wine are consumed at various stages in the narrative and matzo is eaten three times.

The conclusion of Passover takes place on the seventh day and is another full Jewish holiday called Mimouna (primarily celebrated in Israel) with special prayer services and a festive meal. This day commemorates Moses?s parting of the Red Sea. According to Exodus, the Pharoah reversed his decision to free the Israelites and sent his army after them. He chased them to the Red Sea, where Moses commanded the sea to separate and create a path for the Israelites. Once they had safely crossed, Moses removed the path and the Red Sea came crashing down on Pharoah?s pursuing army. On this last day, chametz may once again be eaten.

For more in-depth information on the story and observances of Passover please visit Chabad.org, bbc.co.uk and chabad.org/kids.