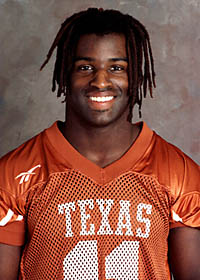 Is this Longhorn a lock? Texas running back Ricky Williams now owns the NCAA Div. I rushing record. Saturday he could take home the 1998 Heisman Trophy.

Needing 11 yards in the final regular season game of his career to set the all-time Division I career rushing record, Williams did what he does best, breaking one for 60 yards and a touchdown. He went on to rush for 259 yards in the game to lead the underdog Longhorns to a victory over in-state rival Texas A&M. It was the culmination of the greatest college career (from a statistical standpoint) that a running back has ever seen. In a recent USA Today poll, 47 percent voted for Williams as the Heisman winner. The next-closest competitor received 10 percent of the vote. In addition, with all modesty aside, the other three main contenders for the trophy all said that if they had a vote, it would go to Williams. It's all his.

Ironically, McNown's best game from a statistical standpoint was the one that essentially knocked him out of the Heisman running. In the Bruins' 49-45 loss at Miami, the senior completed 26 passes in 35 attempts for a whopping 513 yards. He also threw five touchdowns and no interceptions. It wasn't enough, as UCLA's oft-criticized defense couldn't contain the Hurricanes. The Bruins' 20-game winning streak and McNown's chance for a Heisman Trophy came to an end.

Aside from the stellar passing numbers shown above, Bishop has also rushed for 748 yards and 14 touchdowns. He is a remarkable talent and accounted for most of the offense for a Kansas State team that had gone undefeated until the Big 12 Championship game. But Bishop's 13th fumble of the year was a costly one, helping Texas A&M crawl back and tie the Wildcats late in the game, and win in double overtime.

Couch began his quest for the Heisman in week one by torching Louisville for 498 yards and seven touchdowns. He hasn't thrown for less than 300 yards in a game all year, and has put up numbers that are well past Heisman-worthy. If Couch decides to leave school early, he's sure to be a top-three selection in the NFL draft. But he has three factors working against him in the Heisman vote: 1. Ricky Williams; 2. Kentucky's four losses this season; and 3. Ricky Williams.