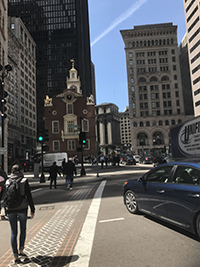 Boston is one of the earliest colonial cities in the present-day United States, and despite its relatively small size it has had a significant impact on the course of U.S. history. From its role in the American Revolution to its present-day importance in American intellectual life and innovation, the city Oliver Wendell Holmes lovingly called “The Hub of the Solar System” is one of America’s most prominent places.

Boston was founded by Puritan settlers in the year 1630. The Puritans intended to make a strict religious community of the “elect,” which significantly affected the kinds of colonists it attracted (as contrasted with, say, the cash crop farming in the Chesapeake region and the different demographics that migrated there.) Not long after, the foundations would be laid for Harvard University in what is now Boston’s neighboring city of Cambridge. Over the course of a hundred years, Boston would become the center of several incredibly important social movements in the early U.S., such as the first Great Awakening and the independence movement. The Boston Massacre (unsurprisingly) took place here, the Boston Tea Party, and Paul Revere’s Ride as well. The Battle of Lexington and Concord would occur in those nearby towns, beginning the Revolutionary War. After the Revolution, Boston lawmakers would prove influential in shaping the new Constitution, and activists here would form the backbone of the abolitionist movement. The greater Boston Area was one of the centers of industrialization in the Industrial Revolution. During this time, more colleges and universities would be built, and the academic communities of New England boomed—today the Boston area houses more than fifty colleges and universities, including several of the world’s most decorated institutions. As a result, Boston is also a significant center for entrepreneurs and innovators, and Boston area groups are some of the leaders in their fields.

Boston might not have as many skyscrapers as nearby New York, but it still has its fair share of famous locales. These include: the Prudential Center, Copley Square, Faneuil Hall, the Old North Church, Harvard Square in Cambridge, the Boston Common, Quincy Market, the Museum of Fine Arts, and the Institute for Contemporary Art.

Per U.S. Census estimates, Boston has the following demographics:

For more about the history of Boston and its surrounding areas, check out the Massachusetts Historical Society.