Can Cloning Make a Better Plant?

We read a lot about cloning in the news these days. Ever since Scottish scientists created “Dolly,” the first cloned sheep, in 1997, there has been lively debate about cloning and the possibilities it raises.

There are several types of cloning, although we tend to think primarily of cloning in the reproductive, or Dolly sense of the word. In Dolly's case, scientists removed the nucleus of an egg cell taken from one sheep, and injected a mammary gland cell from another sheep into the nucleus-free egg cell. This specialized cell, which in time became Dolly, was implanted in the uterus of a third sheep, who served as Dolly's surrogate mother.

In addition to reproductive cloning, molecular biologists have been cloning genes and DNA since the 1970s for laboratory work. And therapeutic cloning (sometimes called embryo cloning) research is under way, with the goal of harvesting stem cells that can be used to treat disease and for other purposes.

Therapeutic cloning has drawn a great deal of criticism and generated ethical concerns because it requires the use of human embryos.

There are plenty of books and websites from which you can learn more about all types of cloning. If you're interested, it would be a good idea to learn what you can, as cloning promises to continue to be a hot topic in our society.

For the purposes of this experiment, however, you needn't get excited about stem cells or DNA or anything like that. The experiment in this section deals with plant cloning, which is simply making a plant that's identical to another.

The problem you'll attempt to solve during the course of this science fair project is whether a plant you clone from another plant is better than the original. Let's explain what that means.

In horticultural terms, the word “clone” is used to designate all the descendants of a single plant, produced by vegetative methods. This means that the plants multiply by means other than seeds.

A plant produced using the vegetative method is said to have been asexually reproduced. The production of seeds for the purpose of producing plants is called sexual reproduction.

All of the plants that are produced from one plant have a common origin, and are considered extensions of a single plant.

Cloning of plants, or artificial plant propagation, commonly involves separating a portion of the parent plant in order to produce an independent plant. Almost any part of the plant, including roots, stems, and leaves, is capable of vegetative reproduction.

The cloning of a plant can be accomplished in several ways, including the following:

So as you now know, there are numerous ways to clone plants. Our question is whether the cloned plant is stronger than the original. Does it live longer? Grow better? Resist disease better?

A hybrid plant is the offspring of two varieties or species of plants. A tangelo, which is a mixture of an orange and a tangerine, is an example of a hybrid.

If you want to, you can use the name of this section, “Can Cloning Make a Better Plant?” as the title of your science fair project. Or, you might want to consider one of the titles listed below.

If none of those titles strike your fancy, go ahead and make up one of your own. Let's get started.

Cloning allows for the possible propagation of large numbers of plants with desirable traits, such as a high fruit yield or resistance to disease. When plants are propagated, it means that they're produced in large numbers in order to create a supply of them.

Dolly, the sheep cloned by Scottish scientists in 1997, was put to sleep in February 2003. The average age for Dolly's breed of sheep is about 12 years, but Dolly suffered from cancer and other ailments.

In the world of fruit and vegetable farming, having high-producing plants and trees is advantageous, and often necessary for economic survival. A farmer who can get 50 tomatoes from one plant will be better off than one who's only getting 30 tomatoes.

Insects often carry the pollen, which are the male eggs, from the flower of one plant to the carpal, which is the female receptacle, of a flower of another plant. Seeds form as a result. The plants that grow from these seeds are a cross between the two different plants.

If you want an exact copy of a plant, however, without waiting for self-pollination to occur, then cloning is the way to go.

In the experiment outlined later in this section, you'll use a method of vegetative reproduction (stem cuttings) to clone plants from a parent plant. Your control will be the parent plant, and the cloned plants will be your variables.

Stem cuttings are a common, and fairly easy, method of achieving vegetative reproduction. You will need a begonia plant, which is a very common plant variety. If you can't find a begonia, you can try the experiment using another type of plant. A begonia, however, should not be difficult to locate.

After you've taken cuttings from the parent plant and grown them into separate plants, you'll want to compare the parent plant with the results of the vegetative reproduction you've achieved. You'll want to see which of the plants appear stronger, have brighter flowers and foliage, produce more flowers, and so forth.

Take a moment here to make a guess about how the plants will compare. Do you think the older plant will be healthier because it's more established? Or that the newly rooted plants will be because of their new growth? Perhaps taking root cuttings from the parent plant will stress the plant to the point that it will become unhealthy.

Go ahead and venture a hypothesis about how you think the cloned plants will compare to the parent plant, and then you'll learn how to take a root cutting and what to do with it once you've taken it. 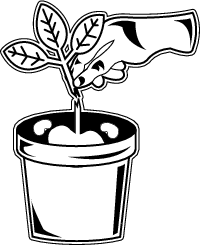 You will need, as stated earlier, a good-sized begonia plant, from which you'll take five stem cuttings. It's best to use a sharp, serrated knife (like a steak knife), to cut a stem from a plant. Scissors or a nonserrated knife tend to crush the plant tissue.

To take a stem cutting, make a diagonal cut on a main stem or a side stem. The stem pieces you cut should be about two to three inches long, and contain two leaves at two different points along the cut stem.

To better ensure that roots will form, you can dip the stem into a rooting enhancer such as Roottone or Hormonex. These products contain a chemical that helps generate roots. Using such a product for this experiment is recommended, but not necessary.

This project requires a significant amount of time to complete properly. It could take you up to four months to grow the stem cuttings and have adequate time to compare them with the parent plant. Be sure to begin working on the experiment in plenty of time so that your project can be completed before the fair.

Materials you'll need for this experiment are listed below.

Once you understand how to make root cuttings and have assembled the necessary materials, you're ready to begin the experiment, as outlined next.

The root enhancer is not necessary, but if you use it, be sure that you use it on all the stem cuttings, not just some. Treating only some of the cuttings would create another variable in the experiment.

Be sure to have everything you need ready to go before you begin the experiment. The stem cuttings should be planted into the soil soon after they're made.

Providing warm (room temperature) soil and high humidity will greatly help along the propagation process. This can be accomplished by covering the planting container with plastic wrap or a piece of glass to simulate a greenhouse. Do not place the cuttings in direct sunlight until they are well established. 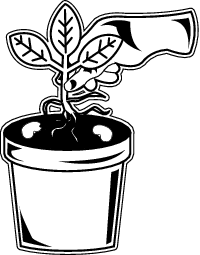 Use the following charts, or make your own charts, to record growth rate and other observations about the five stem cuttings and the parent plant.

Notice which plants appear healthiest, have the most blooms, and so forth. Be sure that all the plants are kept under the same conditions (amount of light and water, and so forth) until your experiment is complete. 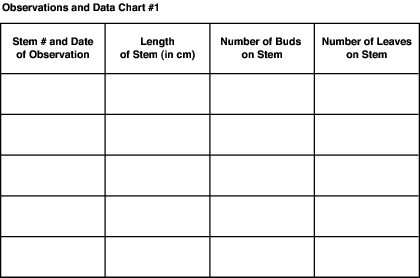 While you're recording the growth rate and other features of the new plants, be sure to continue observing the parent plant. Record what you see happening to that plant, as well. 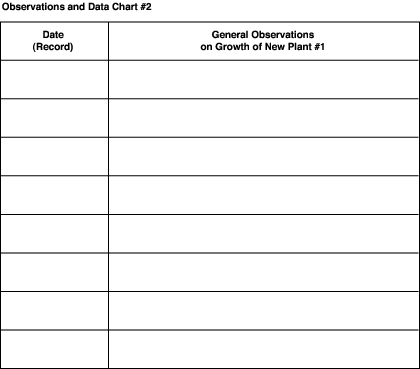 Copy this chart, or create a separate chart for each of the five stems, and use them to record general observations during the weeks of new growth.

When you've completed the experiment and have had enough time to observe growth and changes in both the root cutting plants and the parent plant, consider what you've seen.

So what have you learned? Does cloning make a better plant or simply an identical plant?

Many plants that can be propagated through stem cuttings can be rooted in water instead of soil. This method does not require creating the additional humidity, as you did when you rooted cuttings in dirt.

Another method of further investigation is to clone the cloned plants. You could make generation after generation of begonia plants.

If you're interested in taking the experiment you completed a step or two further, you could root some cuttings in water, and then compare the growth rates and success rates of the two methods.

Begonias can also be propagated by removing a leaf, cutting the veins of the leaf, and placing the leaf on -top of warm soil in a humid environment. Place small stones on top of the leaf to make it lie flat. New plants will grow at the places where the veins were cut.