Is the DNA of a Cow Different from a Chicken's?

You probably know a little about DNA, especially if you've chosen to do this project for your science fair. DNA has been a hot topic over the past few years as it relates to DNA patenting, genetic engineering, genes, and biotechnology.

You'll read a little bit about DNA before we move on to the actual experiment for this project. It's important to have a good understanding of what DNA is and how it works before thinking about the particular experiment outlined in this section.

So get ready to learn a little more about DNA, and then you'll learn how you can extract DNA from cow and chicken livers in order to compare them.

The problem, as stated in the title of this section, is to find out whether the DNA of a cow is different from the DNA of a chicken. To solve that problem, you need to know something about DNA, and how it varies from species to species.

DNA is short for deoxyribonucleic acid. It is the material that determines inheritance of eye and hair color, height, stature, and so forth. DNA is found in every cell of most living organisms, including humans, animals, fish, birds, plants, and bacteria. It's even present in viruses.

DNA—short for deoxyribonucleic acid—is a very special molecule that is necessary to life. All living organisms contain DNA. It is the material that determines what color eyes we'll have, what color our hair will be, how tall we'll be, and many other human, plant, and animal traits.

The bodies of animals, including humans, are made up of different types of cells. These cells include muscle cells, blood cells, skin cells, bone cells, nerve cells, and many others.

DNA contains a chemical code that's used to make proteins within these cells. DNA transmits chemical messages from the nucleus of a cell to other molecules, specifically RNA (ribonucleic acid). This, in turn, builds a polypeptide chain of amino acids that become a protein.

There are 20 different amino acids. The different combinations of these amino acids in a polypeptide chain determine the function of the protein.

There are both proteins and DNA found within the nuclei of every cell of an organism.

Proteins are large molecules that serve many different functions. There are different types of proteins, all of which perform different jobs within a cell.

Among different types of proteins are structural proteins that make up hair, fur, tails, horns, fingernails, spiderwebs, tendons, ligaments, and connective tissue; storage proteins such as seeds and eggs that store amino acids for developing plants and animals; enzymes, which speed up chemical reactions; and contractile proteins, which are the major component of muscles.

During the course of the experiment in this section, you'll learn how you can release, or extract, DNA from its nucleus. Once you've done that, you can compare the DNA from the chicken liver with that from the cow liver to see if they're different.

If you want to, you can use the title of this section, “Is the DNA of a Cow Different from a Chicken's?” as the title of your science fair project. Or you could consider one of the titles suggested here:

Whatever title you choose for this project, be sure to work carefully, and follow the directions closely. This project is a little more complicated than most, and will require careful work.

DNA sounds like a terribly complicated, mysterious matter, but it's basic to every living thing. You are what you are, largely, due to DNA. Understanding DNA also allows scientists to study genetically related diseases and look for means of preventing them.

James Watson and Francis Crick received the credit for determining the double helix shape of DNA in 1953 in Cambridge, England.

The point of this science fair project is to show you that DNA isn't mysterious or something that only scientists can comprehend. You'll actually isolate and retrieve DNA from two different animals in order to examine and compare it.

This is a multi-step process, but it's not overly difficult or complicated. Knowing how it occurs will give you a much better understanding and appreciation for what happens in biology labs.

Before you venture forth with a hypothesis, you should have a basic understanding of what you'll be doing during the experiment. 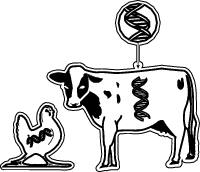 You'll conduct an experiment using liver cells to determine whether the DNA of a cow is different from that of a chicken.

Don't get grossed out, but you'll be working with chicken and cow livers, each of which contain many cells, and in turn, DNA and proteins. The first thing you'll do is chop up the liver in a blender. This will begin to break up the cells.

Then, because you want to get at the DNA contained within those cells, you'll need to break the plasma or cell membranes that surround cells. This process is known as lysing. Plasma membranes are constructed of two layers of compounds, called phospholipids.

Phospholipids act like fats, in that they don't mix with water. This fatty substance is located on the inside, but not the outside, of the membrane.

The plasma membrane can be broken apart by using liquid dishwashing soap. This acts as a “degreaser,” cutting through the fatty material in the membrane.

The process of breaking the plasma of the cell is known as lysing.

In order to remove any proteins that are still entangled in the DNA, you'll treat the DNA with an enzyme such as meat tenderizer or enzymatic contact lens cleaner. This ingredient will be sparingly added to the DNA mixture.

The next step is to isolate the DNA so that you can retrieve it and examine it. You can do this by mixing an equal amount of cold rubbing alcohol to the DNA mixture.

DNA is insoluble in rubbing alcohol, and it will separate out of the solution. The mixture will now have three distinct layers: a bottom liquid mixture of broken cell components, a middle layer of stringy DNA and a top layer of rubbing alcohol.

This experiment is a little different from most in that there are no actual controls and variables. The experiment is simply the extraction and comparison of DNA.

Once you've got the separated material, you can retrieve the DNA by spooling it onto a stick.

If you're thinking this sounds a little bizarre, just stay with us for a little bit longer. This isn't as difficult or complicated as you might think.

Once you process the DNA from both the cow and chicken livers, you'll be able to observe any differences. Base your hypothesis on whether you think the very apparent differences between cows and chickens mean that they must have very different DNA.

As stated a bit earlier, this experiment is a little more complicated than most, and requires some materials (such as liver) that aren't too likely to be lying around the house.

Make sure you'll be able to get the materials you need for the experiment before you commit to doing the project. They are listed below.

Once you've gathered all the materials, you'll be ready to begin the project.

Because you'll be using a knife and blender for this experiment, you'll need to work carefully. Be sure that you have adult approval and supervision before you begin working.

DNA will keep indefinitely when covered with alcohol in a sealed container. If you do this experiment at home and don't have a microscope, you could carefully transport it to school to observe it under a microscope.

The quantitative aspects of this experiment are in the procedural steps. You must follow all the steps of the experiment carefully, keeping track of what you've done.

Your analysis of the extracted DNA, however, will require more qualitative work. You'll need to describe what you observe, including the DNA's color, texture, and general appearance. Write down all of your observations.

Studying the DNA under the microscope will provide you with a greater, more detailed view of this nucleic acid as a stringy structure.

Record all your observations carefully, taking particular care to note the differences between the cow and chicken DNA.

Because your results are primarily qualitative, it's very important that you make careful observations and keep detailed notes.

If you're really into DNA after this experiment, there are all kinds of additional investigations you can pursue. You could further this experiment by extracting DNA from other sources, such as bananas, kiwi fruit, and animal muscle and compare the resulting DNA.

Remember that all living organisms—not just animals—have DNA. It would be fun to see how the DNA of a tomato, for instance, compares with that of a pineapple.