The question "Is Mount Olympus Real" gets asked more often than you might think on the Internet. The root of this question is that, clearly, Mount Olympus is not the actual physical home of the gods. If you climb the mountain, you're going to get a pretty view but not much else. But it is certainly real, as are many other places of mythological importance.

Throughout the world, religious and cultural identities are deeply interconnected with the physical landscape in which they develop. In ancient Greece, this interaction between the physical and mythical landscapes can be seen in the way cities and religious sanctuaries rose up concurrently with the development of a mythological past. As a result, many of the settings of Greek myth are real locations which served as nexus points between the physical and spiritual worlds for the Hellenistic Greek religion. As a result, many of the most important locations in Greek myth have become destinations for tourists inspired by the legends of Olympian gods and heroes. 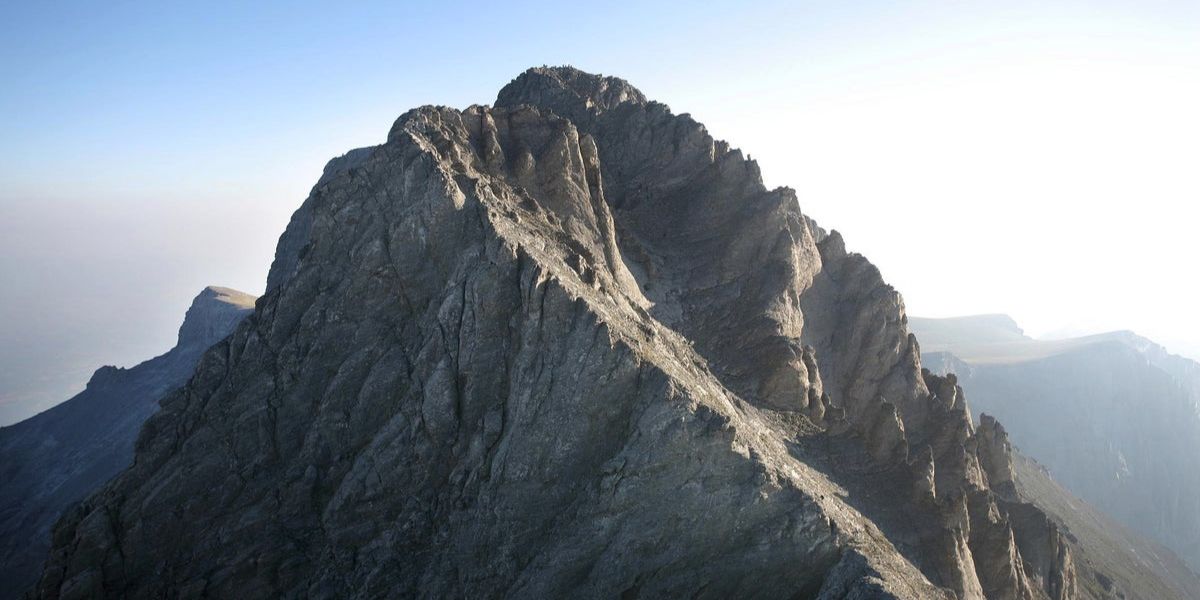 Mount Olympus is remembered as the home of the gods in ancientGreek mythology. In his classical epic, The Iliad,Homer describes Olympus as a fortified palace built below the mountain's highest peak. At the very top of the mountain sat the throne of Zeus, the thunderbolt-wielding king of the gods, who sat above the rest of the pantheon. The Muses and Graces permanently resided on the mountain, along with the twelve Olympiangods: Zeus, Hera, Poseidon, Demeter, Athena, Apollo, Artemis, Ares, Hephaestus, Aphrodite, Hermes, and either Hestia or Dionysus.

The real Mount Olympus rises on the border of Macedonia and Thessaly, which was historically considered to be the home of the Olympians during the classical period. It is the highest mountain in Greece. Mytikas, its highest peak, reaches 2,918 meters above sea level. On the summit of Agios and Antonios, just south of Mytikas, researchers have uncovered an open-air sanctuary identified as a temple to Zeus. This find is one of the oldest archeological discoveries of the Hellenistic period and proves an ancient association between the mountain and the home of the gods.

Besides its cultural significance, Mount Olympus is famous for the rich biodiversity throughout the mountain's shrubland, forests, and alpine areas. In 1938 It became the first area in Greece to be designated a National Forest and was later designated a UNESCO Biosphere Reserve in 1981. These protections support an ecosystem of more than 104 species of birds, 32 species of mammals, 30 species of reptiles and amphibians, and a wide variety of invertebrates. Many of the species present within the reserve are endangered, including the Geoffroy's bat, the chamois, the golden eagle, and the bearded vulture. The mountain supports at least 20 locally endemic plant species.

Tourism to the surrounding communities of Thessaloniki, Dion, Litichoro, Karitsa, and Kokinopilos is one of the main economic drivers in the region. Much of this tourism comes from climbers inspired by Mount Olympus's cultural significance and natural splendor to reach the highest peak. In doing so, these tourists are following the footprints of Swiss painter Daniel Baud-Bovy, who, in 1913, completed the first modern ascent of Mount Olympus with his guide Christos Kakkalos--as well as of countless Iron Age pilgrims to the temple of Zeus. 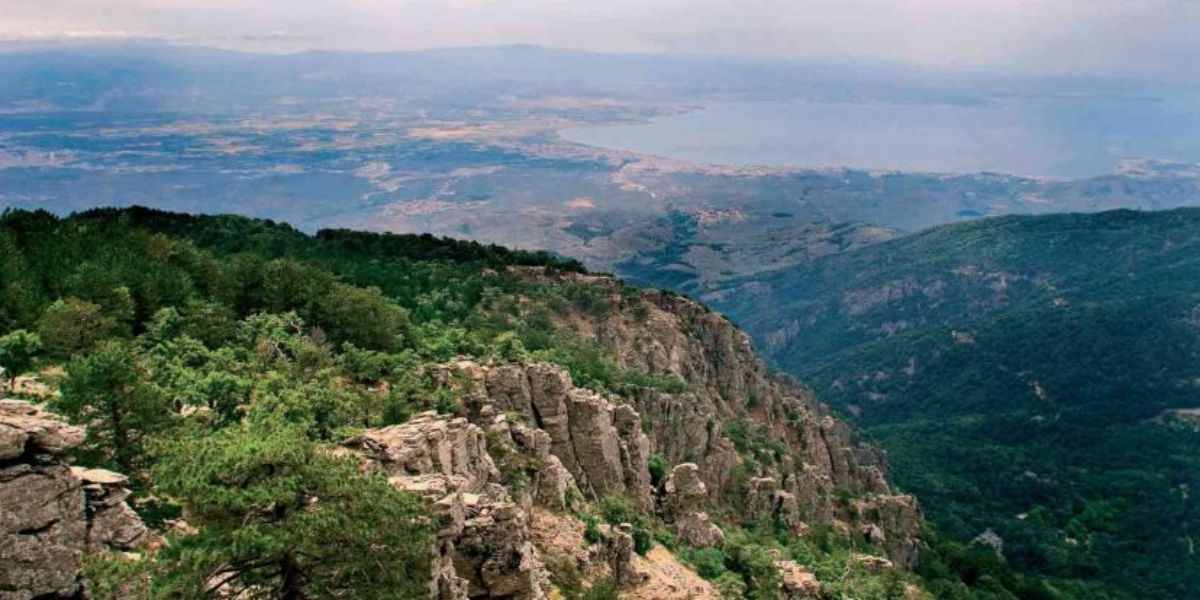 Another mountain sacred to Greek Mythology was Mount Ida. According to legend, the titan Cronos was given a prophecy that he would be overthrown by his children. Determined to hold onto his power, Cronos ate each of his children as soon as they were born to his wife, Rhea. After giving birth to Zeus, her sixth and youngest child, Rhea could not bear the thought of losing another child and hid him in the caves of Mount Ida, wrapping a stone in swaddling cloths for Cronus to eat in his place. Zeus would go on to overthrow the titans and free his siblings, the Greek gods Hera, Poseidon, Hades, Hestia and Demeter, from his father's stomach.

The Psilitoris UNESCO Global Geopark was designated in 2015 to protect the area's geodiversity, seen in its wide variety of sedimentary, volcanic, and metamorphic rocks. The cave systems throughout the park are significant both for their geological significance--housing Permian fossils and ancient rock formations--as well as their importance to Minoan and Greek culture. Idaion Andro cave is said to be the exact cave where Zeus was hidden by Rhea.

The Geopark supports a diverse ecosystem of hundreds of plant and animal species, including wild cats, orchids, and tulips endemic to the Psilitoris mountains. 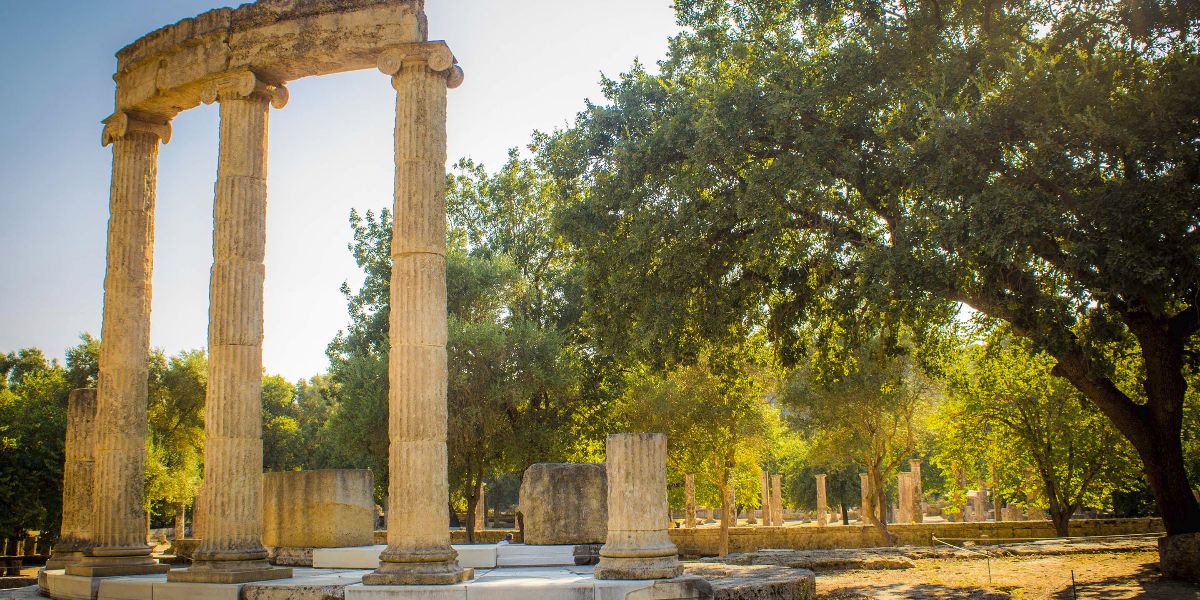 The modern town of Olympia on the Peloponnese peninsula carries a deep historical and mythological legacy. After Zeus fled the caves of Mount Ida, he was pursued across the Aegean Sea by the power-hungry Cronus. It was on the site of modern day Olympia where Zeus finally turned to fight his father. Upon killing his father, Zeus decreed that the Olympic Games be held on location of the battle to commemorate the victory of the Olympian Gods over the titans.

With a history spanning back to the 4th millennium B.C.E., the sanctuary of Olympia gained prominence between the 10th century B.C.E. and the 4th century C.E. as a major center of religious, political, and athletic life in ancient Greece. Many sports structures at the Archeological Site of Olympus were built specifically for the celebration of the Olympic Games. These structures included a stadium, hippodrome, gymnasium, and thermal baths. The games were held every four years from 776 B.C.E. until 391 C.E., when they were banned by Emperor Theodosius I for being a pagan rite.

While the ancient Olympic Games are significant for their mythological associations with the victory of Zeus over the titans, they are best remembered as the precursor to the modern Olympic Games, founded in 1896 by Pierre de Coubertin.

In addition to its fame as the birthplace of the Olympic Games, this site was also known as the location of one of the Seven Wonders of the Ancient World: The Statue of Zeus at Olympia. The 40-foot-tall statue was crafted by Athenian sculptor Phidias from ivory and gold around 435 B.C.E. to be displayed in the Temple of Zeus. A series of disasters destroyed the Sanctuary at Olympia, and though the statue was transported to Constantinople, it, too, was destroyed by a fire in 462 C.E., relegating it to part of Olympia's legendary past.

Though the Temple of Zeus was destroyed, the sanctuary of Olympia remains of remarkable archeological value. The Altis, a sacred grove dedicated to the king of the gods, supports the same tree and plant species as were found in antiquity, while religious and administrative structures ring the sites of the temples to Zeus and Hera. 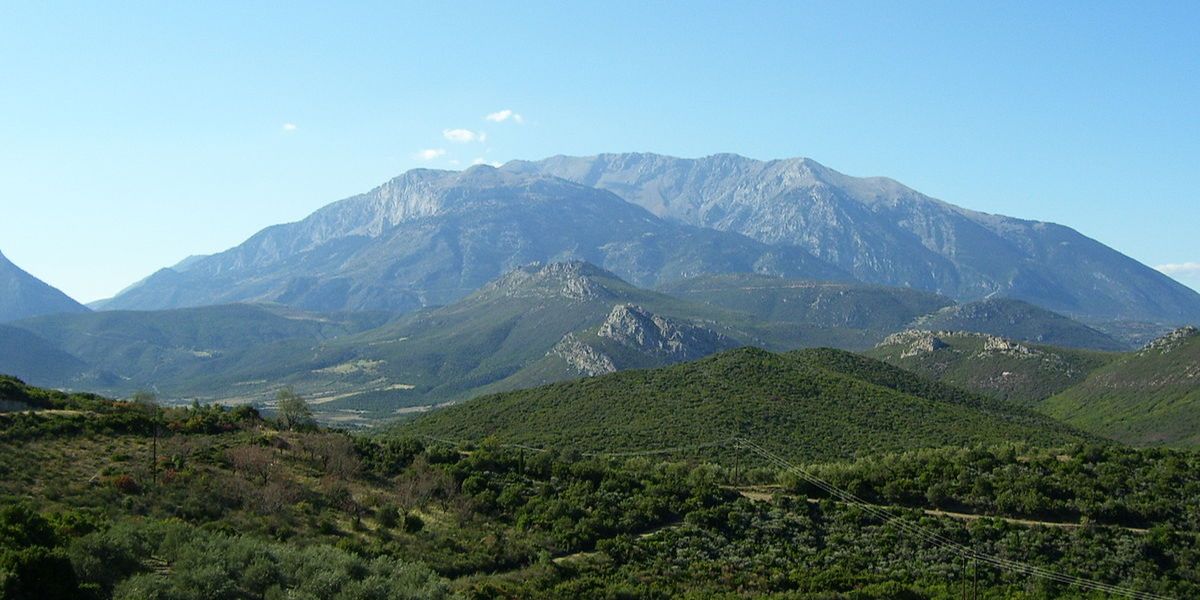 Atop Mt. Parnassus lies the sanctuary of Delphi, famous throughout the ancient Greek world as the residence of the Pythia, high priestess and oracle of Apollo. Between the 8th and 6th centuries B.C.E., Delphi's prestige and political influence spread throughout the Hellenic world. Kings sent offerings to Apollo in search of divine favor and guidance from the oracle of Delphi, while pilgrims came from across the known world to visit the sanctuary.

The City of Troy 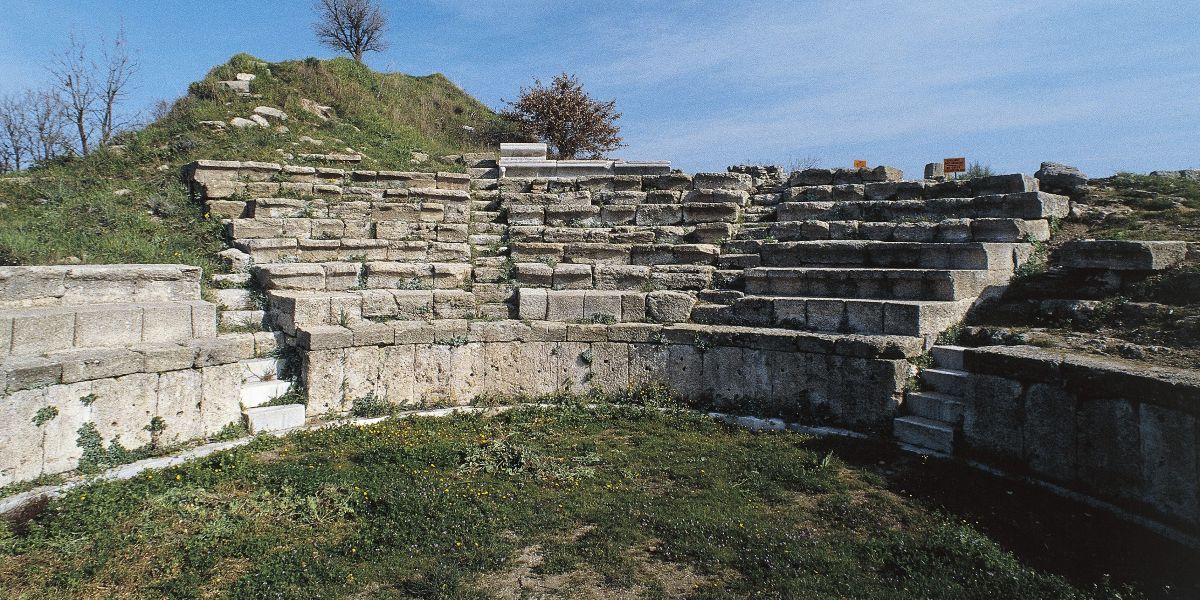 The famous city of Troy features in one of the seminal pieces of classical literature, Homer's Iliad. Though Troy was once thought to be a mythical location with no real world counterpart, the remains of this city were rediscovered by archeologist Heinrich Schliemann in 1870 and confirmed to be the location of one of the first points of contact between the civilizations of Anatolia and the Mediterranean.

Located on the mound of Hisarl?k, 4.8 km from the Dardanelles in modern day Turkey, the archeological site has uncovered 4,000 years of Trojan history. The discoveries on this site include a citadel, eleven gates, and five defensive walls. The temple to Athena is one of several monuments associated with the Greek city of Ilion, which was founded on the site of Troy.

The rediscovery of the ancient site of Troy forced classical scholars to reevaluate the significance of The Iliadas a historical document by providing physical evidence for the siege of Troy by Spartan and Achaean warriors during the 13th or 12th century B.C.E.

While the setting of The Iliadhas been proven to be a real location, the same cannot be said for the locations in Homer's other work, The Odyssey. With the exception of the Peloponnese, the islands visited by Odysseus on his journey are widely considered fictional, though many are associated with real locations throughout the Mediterranean. In his book, Travelling Heroes in the Epic Age of Homer,Classicist Robin Lane Fox notes that many of these places only became associated with the settings described in The Odysseyafter they were settled by Greek colonists. This custom of identifying new settlement with the heroes and locations of classical epics was carried on by the Etruscans and Romans to associate themselves a prestigious mythological past.

Knossos and the Minotaur's Labyrinth 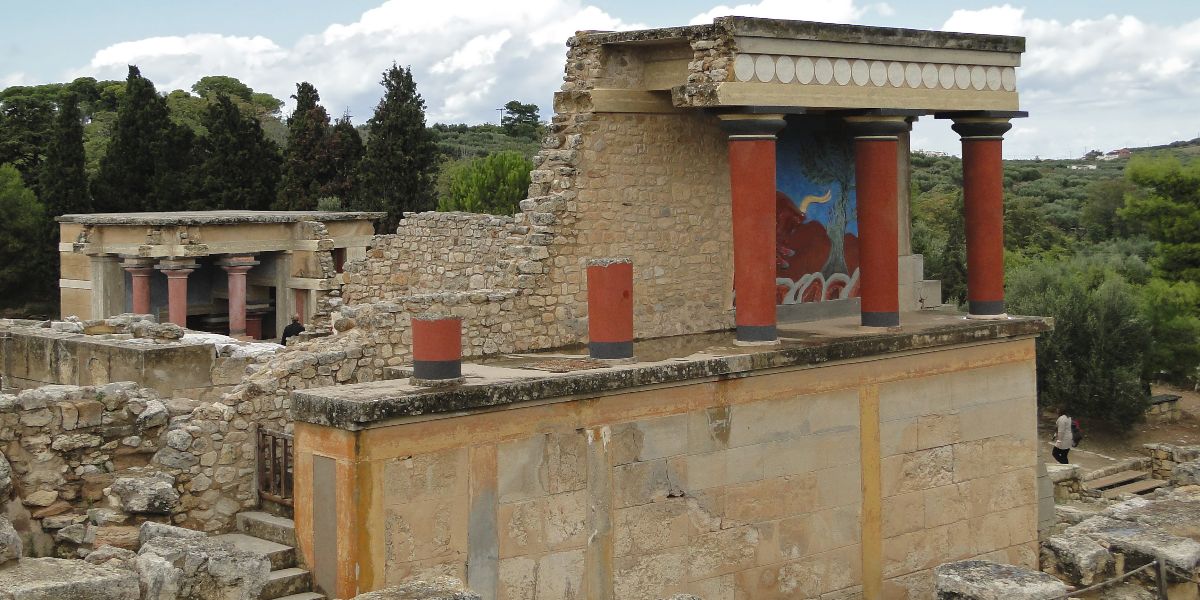 While the exact location and veracity of the Minotaur's labyrinth is debated by scholars, the palace of King Minos, the mythical ruler who was said to have ordered the building of the labyrinth, is a real location on the island of Crete. The Minoan civilization, named after King Minos by archeologist Arthur Evans, played an important role in Greek history.

According to legend, King Minos angered Poseidon by refusing to sacrifice a beautiful white bull in his honor. As revenge, the God of the Sea made Minos's wife fall in love with the bull, who eventually gave birth to the monstrous minotaur, a half-man, half-bull creature who fed on human flesh. King Minos commanded the inventor Daedalus to build a labyrinth to hide the monster. King Minos was said to have regularly sacrificed Athenian youths to the monster until Theseus, Prince of Athens, entered the labyrinth and killed the minotaur.

Today, the palace at Knossos is a significant archeological site, boasting unique artistic and architectural treasures, including a complex and monumental palatial layout that some scholars suggest inspired the myth of the labyrinth.

Sources: UNESCO; In Greece: Journeys by Mountain and Valley by Daniel Baud-Bovy and Fred Boissonnas;