A city rich in culture and diversity, San Francisco sits on a hilltop overlooking the Pacific Ocean. Millions have entered San Francisco Bay in search of the American dream, bringing with them food, music, and customs from around the world. Known for its hilly streets lined with colorful houses and cable cars, San Francisco is also home to dozens of markets, museums, parks, and more. Follow this slideshow to learn more about some of San Francisco's most notable landmarks. 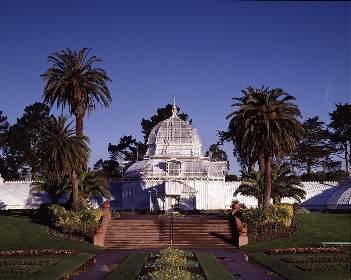 The Conservatory of Flowers at Golden Gate Park opened in Golden Gate Park in 1879. A powerful storm destroyed the glass and wood greenhouse in 1998, causing the conservatory to temporarily close. In 2003, the conservatory reopened after extensive reconstruction. The Conservatory features more than 1,700 varieties of tropical plants, from palms to cycads to cacao. In its five galleries, this modern horticultural museum displays many endangered species from over 50 countries and focuses on conservation education. 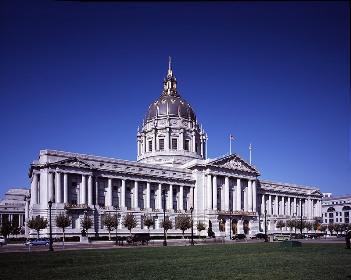 Designed by Arthur Brown Jr. as a civic center, the San Francisco City Hall was part of the American Renaissance movement—a period when the United States experienced a rebirth in literature, art, architecture, and music. It was built to replace the previous city hall, which was destroyed in an earthquake in 1906. The current city hall, which occupies two city blocks, opened its doors in 1915.
Fun Fact: Its dome is almost a foot taller than the Capitol building in Washington D.C. 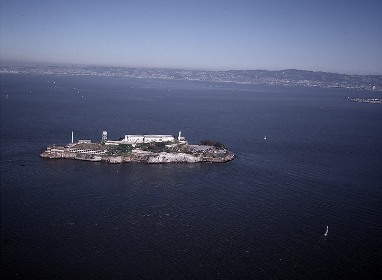 The U.S. government built a lighthouse on Alcatraz Island in 1854. Beginning in 1859, Alcatraz, otherwise known as the Rock, served as a fortress and military prison to defend San Francisco Bay. Due to high operating costs, the government turned Alcatraz over to the Federal Bureau of Prisons in 1934. The Rock was a federal penitentiary until 1963. In 1972, Alcatraz was absorbed into the National Park Service and became a popular San Francisco tourist attraction.
Fun Fact: In addition to serving as a federal prison, Alcatraz has also been a Civil War fort, a bird sanctuary, and the location where the American Indian Red Power movement began. 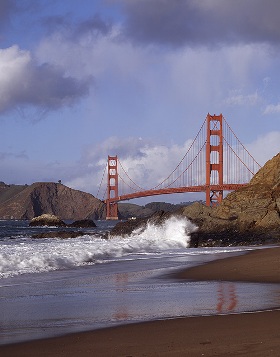 Since its completion in 1937, the Golden Gate Bridge, one of the world's longest suspension bridges, has been a symbol of San Francisco. Built across San Francisco Bay, the Golden Gate Bridge connects San Francisco to Marin County as a part of both U.S. Route 101 and California Route 1. The bridge was painted with a special paint that protects it from salt and is touched up regularly.
Fun Fact: Although the bridge appears to be red, it is actually an orange color called "International Orange." The color was chosen to enhance its visibility in the fog. 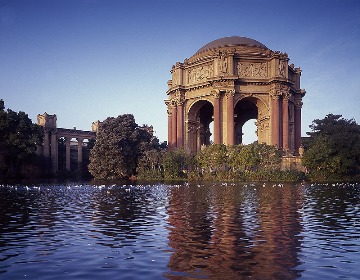 Originally built for the Panama-Pacific International Exposition in 1915, the Palace of Fine Arts now belongs to the city of San Francisco. Its design was inspired by Greek and Roman architecture, with large rotundas and colonnaded walkways. The Palace sits next to the Exploratorium and lagoon in the Presidio of San Francisco.
Fun Fact: Only one of the original eight domes and few of the walkways remain intact today. 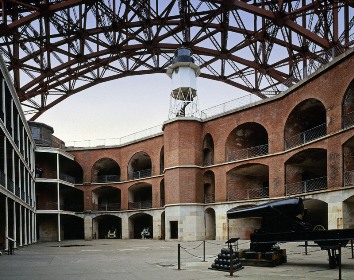 Fort Point was constructed at the entrance of San Francisco Bay during the California Gold Rush (1853-1861). It is considered the most impressive fortification built west of the Mississippi River. For much of its existence, Fort Point has been underutilized, often used as military housing. In 1970, the National Park Service adopted Fort Point as a National Historic Site.
Fun Fact: Although it has never seen battle, Fort Point was intended as a naval base to protect northern California against foreign attacks. 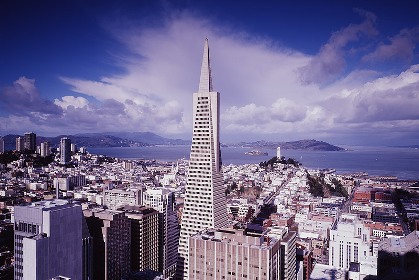 As the tallest skyscraper in San Francisco, the Transamerica Pyramid is easily seen from any point in the city. Built by the Transamerica Corporation in 1972, the building has been owned by a Dutch insurance company since 1999. There are 48 floors of retail and office space in the almost 900-foot Transamerica Pyramid, which is located in the Montgomery Financial District.
Fun Fact: The pyramid is covered with crushed quartz, contributing to the building's gleaming white faade. 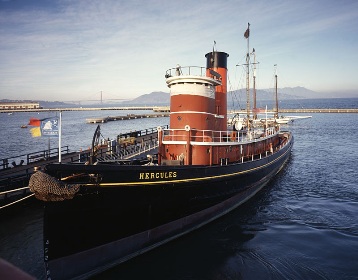 The San Francisco Maritime is located near Fisherman's Wharf on the Pacific Ocean. Adopted as a National Historical Park in 1988, the San Francisco Maritime is home to six historic ships including the Hercules (1907), Balclutha (1886), C.A. Thayer (1895), Eureka (1890), Alma (1891), and the Eppleton Hall (1914). The Hercules (pictured above) was built in 1907 by John H. Dialogue and Son for a San Francisco-based tug boat company.
Fun Fact: The steam-powered ocean tug boat still has its original steam engine that pulled materials for a dry dock at Pearl Harbor and the Panama Canal construction. 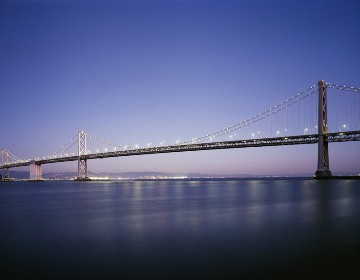 The Bay Bridge, built in 1936, is often overshadowed by the Golden Gate Bridge, which was built a year later. Like the Golden Gate Bridge, the Bay Bridge was built over San Francisco Bay. The Bay Bridge is over eight miles long, connecting San Francisco to Oakland as a part of Interstate 80. The bridge originally served both vehicles and trains, but only vehicles have had access to the bridge since 1958. Financing the construction of such a large bridge was difficult, but President Hoover supported the project and allowed the purchase of bonds to be repaid by toll proceeds at a later date in order to help finance the project.
Fun Fact: The San Francisco Bay Bridge is the longest high-level, steel bridge in the world. 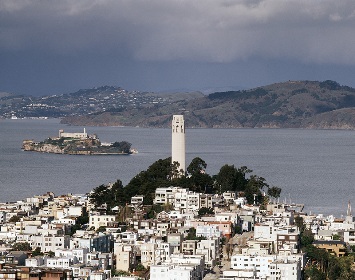 Located on San Francisco's Telegraph Hill in Pioneer Park, the Coit Tower was built in 1933 in an effort to beautify the city. The tower was designed by Arthur Brown Jr. and Henry Howard. The interior of the tower was covered in murals, whereas the exterior of the tower was left unpainted. From the Coit Tower visitors can see the Golden Gate Bridge, Alcatraz Island, the Bay Bridge, the Maritime National Historical Park, and more.
Fun Fact: Twenty-six artists, who were funded by the New Deal federal employment program, painted fresco style murals inside the tower.