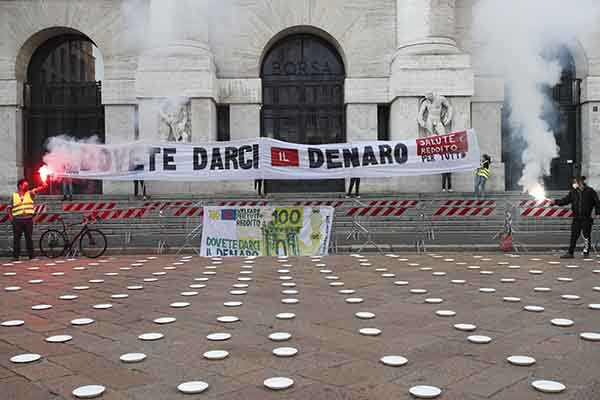 On November 6, Italy announced harsher restrictions, adding a curfew and 6 pm restaurant closures in certain areas. The decision came after the country tallied its highest number of infections and deaths in a 24 hour period. On November 6, it was reported that France has the highest infection rate of Europe, sparking stricter restrictions across the country. Cases are also rising in Germany, as well as Greece. Both will be closing schools and enforcing a curfew. (CNN) 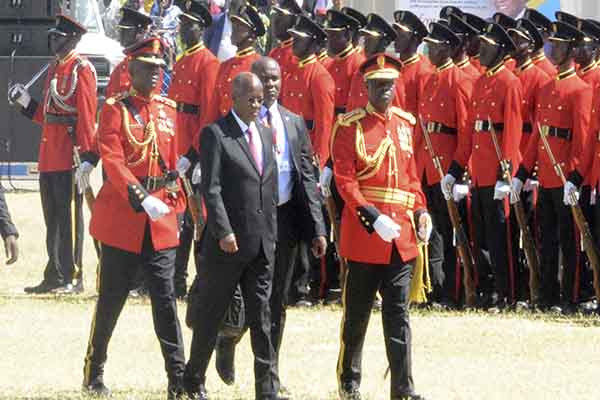 On November 1, amongst protests regarding the election in Tanzania, main opposition leader Freeman Mbowe was arrested. Many other members of the opposition party were also arrested. Reports state that these officials called for the protests nearly a week ago. (CNN) 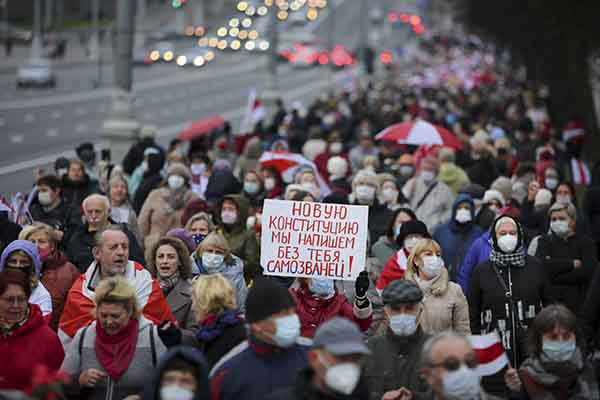 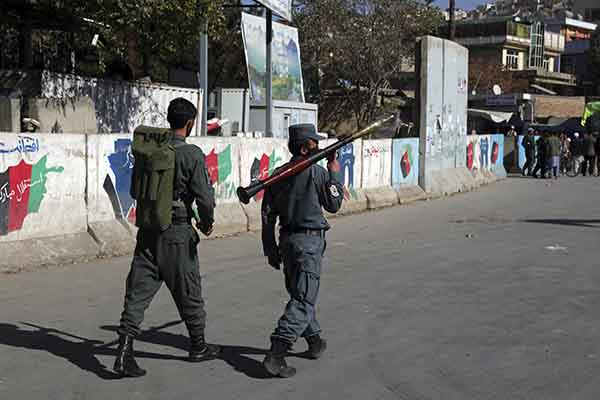 On November 2, at least 10 students were shot and killed after gunmen attacked Kabul University. The gunmen also traded fire with Afghan security forces who responded to the scene, but were mainly targeting students. The Taliban has said it is not responsible for the attack and no other group has claimed responsibility. (CNN) 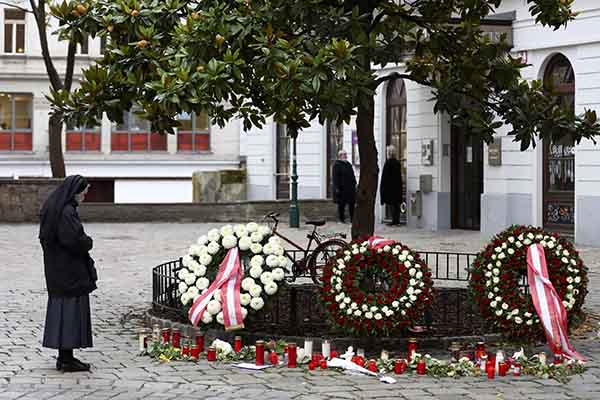 On November 2, as people in Vienna were enjoying the last night out before coronavirus curfews went into effect, gunmen went around bars and restaurants shooting. At least four people died and 22 more were injured during the terror attack. Police have identified a 20-year-old Austrian as one of the attackers and have made further arrests. Police in Switzerland have also arrested two Swiss people in connection with the attack. (CNN) 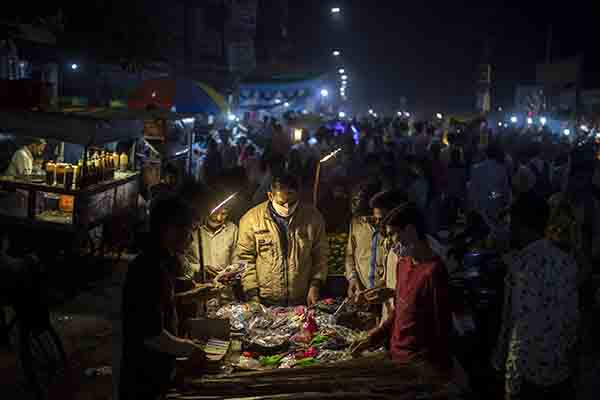 On November 8, scientists at Pfizer and BioNTech announced that the new coronavirus vaccine stops 90% of cases. Over 43,500 people in six countries have been given the vaccine, and no safety concerns have been announced. The two companies hope emergency approval will allow for the vaccine to be used by the end of the month. On November 12, the EU agreed to buy 300 million doses of the Pfizer and BioNTech vaccine. On November 13, India warned that a rise in cases was likely as many left their homes to begin Diwali celebrations. On November 13, Microsoft stated that hackers from Russia and North Korea are attempting to hack coronavirus vaccine organizations. The company has detected attempts but no one has gotten through as far as they know. (CNN/BBC) 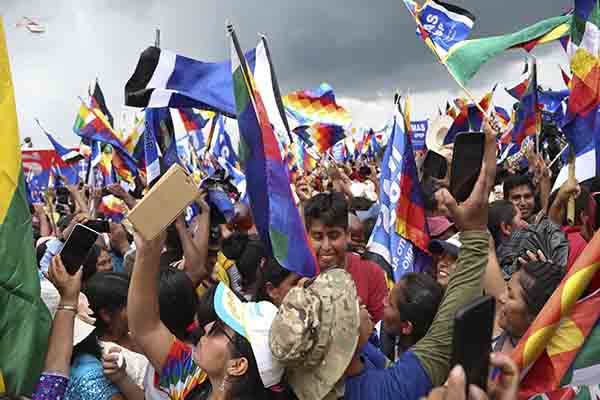 On November 8, Luis Arce was inaugurated as the president of Bolivia. Former President Evo Morales was ousted last year amid angry protests. The inauguration of Arce brings power back to the socialists. (CNN) 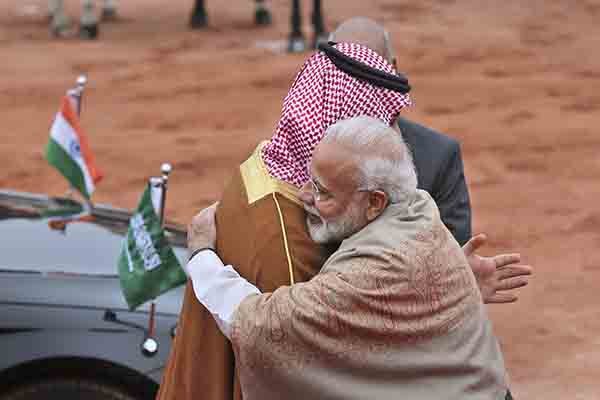 On November 11, foreign diplomats were some of the attendees at a Remembrance Day ceremony in Jeddah. Many diplomats stated that during the ceremony, an improvised explosive device exploded, injuring dozens of people. A Greek consulate employee and Saudi employee were among those injured. No group has claimed responsibility for the attack. (BBC) 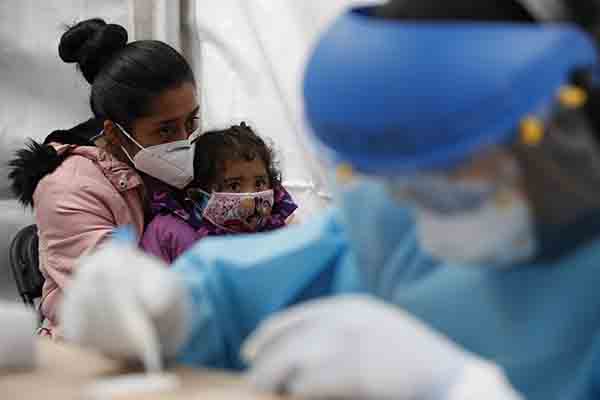 On November 17, reported stories from hospital patients in Russia suggest a grimer picture than that shown. Officials believe the death toll in Russia is far higher than what has been reported, as hospitals and morgues are filling quickly. On November 18, CNN reported on Mexico City?s progress towards a vaccine. Right now, the lab has an assembly line that if successful, will produce millions of vaccines by the end of 2021. Mexico is focusing on the reproduction process of the vaccine in the event that a successful one is difficult to obtain. On November 20, Mexico surpassed 100,000 Covid deaths. Only the Us, Brazil, and India have surpassed this milestone. Many fear Mexico?s numbers will only increase as we enter flu season. On November 20, Toronto moved back into lockdown, as the country experienced an overwhelming number of coronavirus cases. The city will only be open for essential businesses. (CNN/BBC) 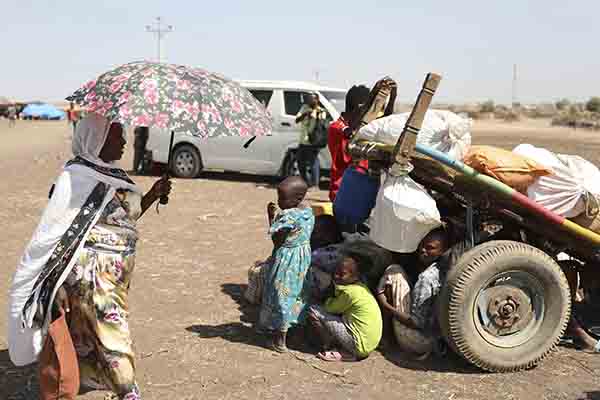 On November 14, rebellious leaders from Ethiopia?s Tigray area launched missiles at Eritrea's capital of Asmara. The attack marks a significant rise in tensions as the two areas enter their twelfth day of conflict. Another two missiles were launched at an airport. Ethiopia?s Prime Minister launched military forces after a Tigraying attack on federal troops earlier this month. On Monday 16, Eritrea claimed to have captured another Tigray town. Hundreds of people have died from the conflict, and at least 20,000 refugees have fled to Sudan. On November 18, Ethiopia issued 76 arrest warrants for army officers accused of being members of the Tigray?s People?s Liberation Front. As the areas continue to clash, Ethiopia?s Prime Minister has said he?s moving in on Tigray. On November 20, aid agencies stated they were unable to reach civilians and called for a ceasefire in the area to provide necessary aid. (CNN) 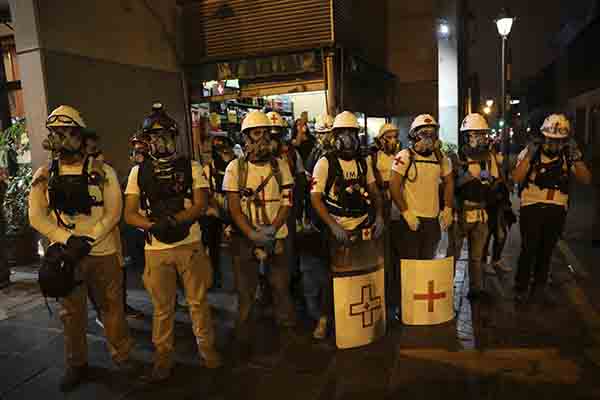 On November 15, after just five days as Peru?s interim president, Manuel Merino resigned. During Merino?s short term presidency, there were violent protests across the country after the impeachment of Martin Vizcarra. Vizcarra was accused of corruption. The protests left at least two people dead and 94 injured. On November 16, Peru?s Congress appointed lawmaker Francisco Sagasti as the new interim president as violent protests continued. (CNN)

Protests Reignite in Uganda and Bangkok

Protests Reignite in Uganda and Bangkok 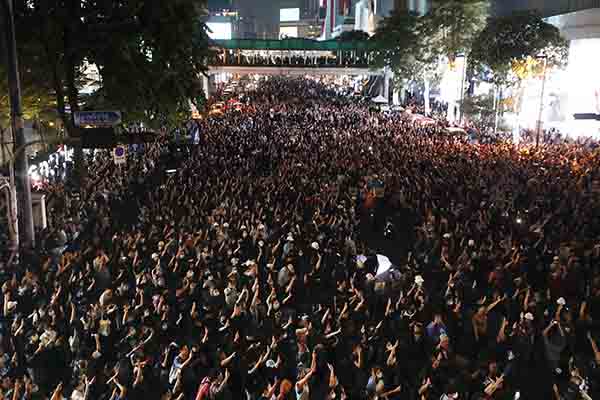 On November 18, protests in Bangkok erupted after Thai officials moved to make two amendments to the constitution. Many protesters believe the country is becoming too militaristic, and they want less government power. Protesters are also fighting against the long-standing monarchy in Thailand. On that same day, protests reignited in Uganda after Bobi Wine was arrested once again. Wine, a presidential candidate, was arrested while campaigning, sparking violent protests across the country. Officials suggested the arrest was related to tighter Covid-19 campaign restrictions. (CNN) 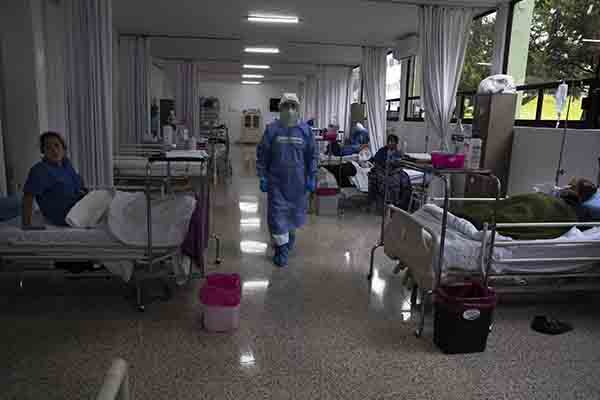 On November 23, drugmaker AstraZeneca announced that its Oxford vaccine is 70% effective with no safety concerns reported. However, the doses given are showing quite different percentages of effectiveness, causing the team to need a little more research before deeming the vaccine more effective. On November 23, Toronto entered its second four-week lockdown in light of rising coronavirus numbers. Residents are to stay home and interact only with those already in the household; however, schools will remain open. On November 25, the WHO announced that Europe was the highest contributor to Covid numbers in the last week. The European region accounted for 44% of cases and 49% of deaths the last week, despite research saying the stricter restrictions is helping. The WHO announced that while number of cases is decreasing, the number of deaths is still on the rise. On November 25, a car with messages written on the side, rammed into the gates of Angela Merkel?s Federal Chancellery in Germany. The incident occurred hours before Merkel was scheduled to have coronavirus safety talks. On November 30, at least 8 inmates died and 50 more were wounded after a coronavirus prison riot in Sri Lanka. The protests occurred due to the rising coronavirus infections in the area. On November 30, it was announced that the NHS COVID-19 app will now allow for payment for those isolated. People who are sent a self-isolation notification are eligible for up to 500 to help support them during the time. The NHS hopes this will be an incentive for people to download and use the app. On November 30, Canada announced that it will spend $77 billion to kick-start the economy as a pandemic relief measure. This is the largest economic bailout for the country since WWII. (CNN) 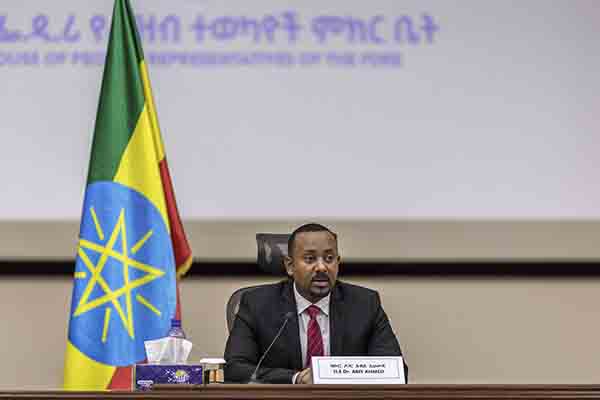 On November 25, the Ethiopian Human Rights Commission reported that at least 600 civilians were killed earlier this month due to their ethnicity. On November 9, Tigrayan youths accompanied by police went door to door and carried out raids, killing hundreds. The event sparked rising tensions and violence in the Tigray regions. On November 25, amid growing international concern, Ethiopian Prime Minister Abiy Ahmed denied interventions. Ahmed stated the incident was internal, and international forces should stand by until called upon. On November 28, Prime Minister Ahmed tweeted that the Ethiopian National Defense Forces (ENDF) have taken control of Mekelle, the capital of the Tigray region. Federal police will continue to round up members of the Tigray People?s Liberation Front as the violence hopefully comes to an end. Despite the siege, Ethiopian forces were still fighting Tigray forces near Mekelle on November 30. (CNN)

Protests Emerge Across the World

Protests Emerge Across the World 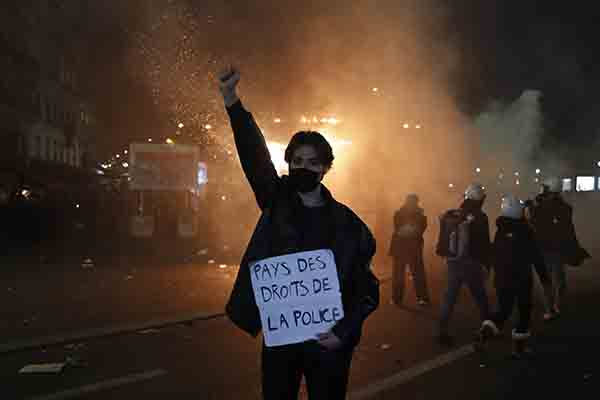 On November 25, a police spokesperson stated that at least 45 people were killed in the protests that continued in Uganda last week. The protests were sparked by the arrest of Bobi Wine, popular music star turned presidential candidate. Witnesses claim that police and military officials fired rifles into the crowd in an attempt to break up protests. The police spokesperson has said that the incidents described are currently under investigation. On November 28, thousands flooded the streets of France to protest a new security law that contains a measure prohibiting the filming of police. More than 100 local elected officials are also joining the protests. The demonstrators are recalling two events of police brutality that occurred this past week, as well. In one instance, video surveillance surfaced, showing police officers beating a black man in Paris. The police officers in the video have been suspended pending investigation. Many demonstrators believe this is proof that police should be filmed. Protestors later clashed with police, who used tear gas in an attempt to break up the protests. On November 30, France?s ruling party promised to change some measures of the proposed security law. On November 28, Black Lives Matter protests emerged in Brazil after a black man was beaten to death in a supermarket. Investigators say the man died of suffocation, causing hundreds to flood the streets of Brazil in protest. The two security guards involved have been arrested but not charged. On November 28, a meeting about pork imports turned violent at the Taiwanese parliament offices. As some officials suggested lower restrictions on US pork imports, other officials threw pig intestines and punches, causing a fight to break out among the two parties. (CNN)