Celebrates the liberation of Black Americans in Texas on June 19, 1865

Juneteenth (a portmanteau of June Nineteenth)is a celebration of Black emancipation?specifically in the state of Texas, on June 19, 1865. What makes this date so special?Well, the history of emancipation in the United States is a bit more complicated than most of us learn in grade school. To understand the origins of Juneteenth, one has to understand a few essential points.

The first is that, despite disagreements about how to address the problem, slavery was the central issue at hand in the Civil War. There are famous alternative narratives (most notably the "Lost Cause," which argues that the beleaguered South fought for states rights in the face of Northern domineering) but the overwhelming body of scholarly work agrees that slavery and its related issues was the prime cause of the war. Disputes about the expansion of slavery westward, the growing strength of Northern abolitionists, the continued success of the Underground Railroad, and Southern fears about slave revolts all led to the hostilities between the different parts of the country. The Confederate States themselvesacknowledged as such.E.g.: 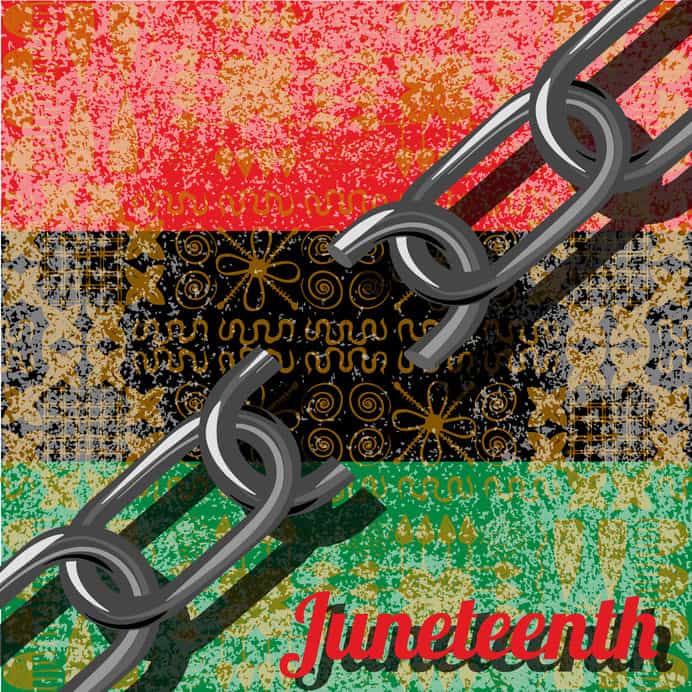 The people of Georgia, having dissolved their political connection with the Government of the United States of America, present to their confederates and the world the causes which have led to the separation. For the last ten years we have had numerous and serious causes of complaint against our non-slave-holding confederate States with reference to the subject of African slavery. They have endeavored to weaken our security, to disturb our domestic peace and tranquility, and persistently refused to comply with their express constitutional obligations to us in reference to that property... This hostile policy of our confederates has been pursued with every circumstance of aggravation which could arouse the passions and excite the hatred of our people, and has placed the two sections of the Union for many years past in the condition of virtual civil war.

?Georgia's Declaration of Cause for Secession

The second point people need to know is that even with the Southern defeat in April 1865, there was a great deal of doubt and concern surrounding the future of free black people in the United States. TheEmancipation Proclamationwas a wartime provision that only targeted the slaveholding states in rebellion. Black people across the South made great strides toward their own freedom, and played a central role in the Union victory, but this didn't guarantee their legal status and didn't protect them from reprisal by white people.

Union General Gordon Granger arrived in Galveston, Texas in June, 1865. General Lee had surrendered at Appomattoxtwo months prior, and the army (as in the rest of the South) was tasked with enforcingfederal law inthe recently rebellious state. Slavery in Texas remainedlargely unaffectedby the course of the war. On June 19General Grangerwould issue General Order No. 3. The order reads:

The people of Texas are informed that, in accordance with a proclamation from the Executive of the United States, all slaves are free. This involves an absolute equality of personal rights and rights of property, between former masters and slaves and the connection heretofore existing between them, becomes that between employer and hired labor.The Freedmen are advised to remain at their present homes and work for wages.They are informed that they will not be allowed to collect at military posts; and they will not be supported in idleness either there or elsewhere.

This federal enforcement protected the emancipated peopleuntil the ratification of the 13th Amendment later in the year. During Reconstruction in the South, Black communities began an annual celebration of the general emancipation, and chose June 19 for the date. The holiday declined after Reconstruction ended, and the states began introducing new discriminatory laws to oppress and segregate Black Americans. It would eventually see a resurgence.

Observance of Juneteenth has traditionally tended towards church-centered celebrations featuring food, fun, and a focus on self-improvement and education by guest speakers. Although initially associated with Texas and other Southern states, the Civil Rights Era and the Poor People's March to Washington in 1968, in particular, helped spread the tradition all across America?to the extent that Milwaukee and Minneapolis now host two of the largest Juneteenth celebrations in the nation.

The state of Texas made Juneteenth an official holiday on Jan. 1, 1980, and became the first to grant it government recognition.

Due to its spike in popularity over the years, by 2008 nearly half of the US states observed the holiday as a day of remembrance. As recently as 2016, legislation in Maryland officially recognized Juneteenth as a holiday, making a total of 45 states that celebrate it officially. While the rest of the nation still waits for the approval of Hawaii, Montana, New Hampshire, North Dakota, and South Dakota, Juneteenth will continue to be a rising holiday throughout the United States.