All About the Winter Solstice 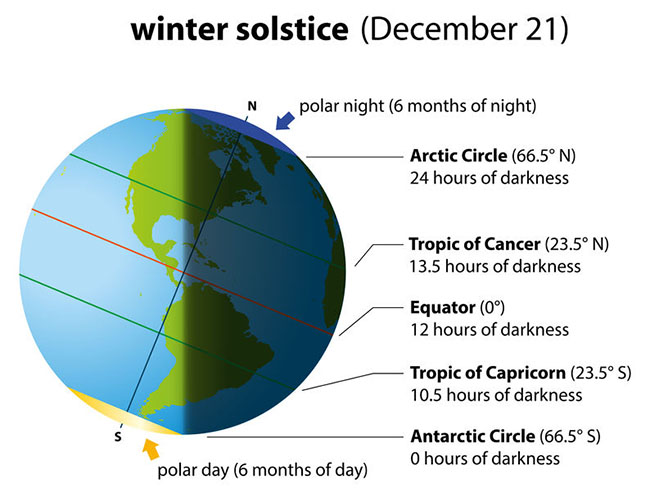 Reason for the Seasons

The reason for the different seasons at opposite times of the year in the two hemispheres is that while the earth rotates about the sun, it also spins on its axis, which is tilted some 23.5 degrees towards the plane of its rotation. Because of this tilt, the Northern Hemisphere receives less direct sunlight (creating winter) while the Southern Hemisphere receives more direct sunlight (creating summer). As the Earth continues its orbit the hemisphere that is angled closest to the sun changes and the seasons are reversed.

Longest Night of the Year

The winter solstice marks the shortest day and the longest night of the year. The sun appears at its lowest point in the sky, and its noontime elevation appears to be the same for several days before and after the solstice. Hence the origin of the word solstice, which comes from Latin solstitium, from sol, "sun" and -stitium, "a stoppage." Following the winter solstice, the days begin to grow longer and the nights shorter.